A recent study found that at least 16 million Yemenis are on the verge of starvation, with that number likely to rise to 20 million if immediate action is not taken to end the war. While the bombs are being dropped by the Saudi-UAE coalition, the U.S. is really orchestrating the overall war effort. The people of this country face a question: Will we sit by and allow the rulers of this country to starve tens of millions of people to death? 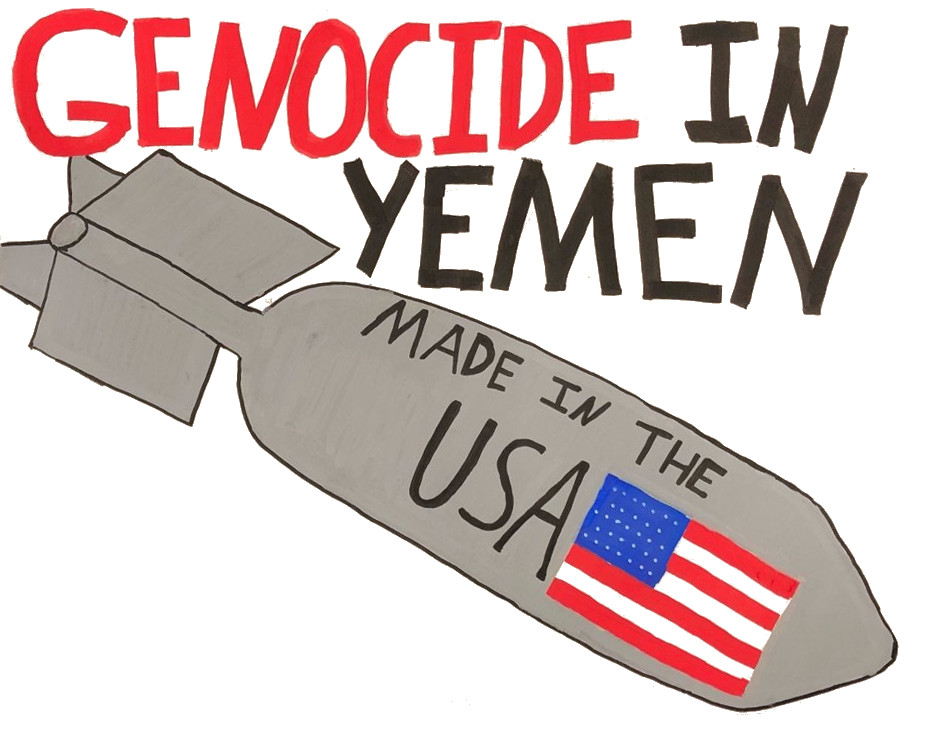 Over a hundred and fifty years ago Karl Marx warned the English working class it would be their own enslavement if they did not support the struggles for Irish and Indian independence (which were at the time two colonies of the British Crown). Today, the U.S. government maintains neocolonial domination of countries like Yemen, extracting massive profits at the expense of billions of people around the world. When the people in oppressed countries like Yemen rise up in protest against these oppressive relations, the U.S. generally responds with brutal crackdowns, new repressive measures, and even outright invasions. In the case of Yemen, the U.S. is sponsoring a genocidal war run by its allies Saudi Arabia and the UAE. Through this war they hope to maintain control of the country and beat-down the resistance of the Yemeni people which shook the country in the Arab Spring, and continues to this day.

Much like during the days of the British Empire, if the poor and oppressed people of this country do not support the Yemeni people and other oppressed people around the world, it will be our own enslavement, both ideologically and politically. We cannot sit by idly while the government of this country condemns 16 million or more Yemenis to death for no crime other than being born in their country.

We cannot allow this government, or any government for that matter, to engage in the wholesale destruction of a people for any reason, and certainly not just to protect its own profits and interests. The people of this country have a political obligation to the people of Yemen to raise our voices in opposition to the war there, and to demonstrate in action that we will not allow the U.S. government to carry out this genocide.

The U.S. run war in Yemen has brought untold devastation to the Yemeni people. Houses, schools, funerals, water treatment plants, agricultural fields, wells, hospitals, and school buses have all been bombed over and over again.

To do otherwise, to sit by idly and ignore the ongoing famine, crisis, and war, is to passively and nihilistically accept the brutal status quo of the present world order. It is to resign ourselves to the fact that 16 million people can be wiped off the face of the earth to further the interests of a few wealthy elites in Washington, London, Riyadh, and Dubai. To allow this genocide to be carried out without raising a hand or lifting a finger in opposition is to allow our thought to become shackled with the prevailing prejudices of the day.

We can mobilize a protest when innocent people are gunned down by right-wing extremists in this country, but to do nothing when the right-wing extremist government of this country (whether Democrat or Republican) conspires to slaughter tens of millions of Arab people is to accept the racist myth that the lives of poor Yemenis are worth less than those of American citizens.

This form of U.S. chauvinism and “America First” ideology is nothing but a colonial mentality of the contemporary world. Nomin-ally, the people of Yemen live an in independent country. But what sort of in-dependence can they have when in fact their government has served as a lackey and pawn for U.S. interest for decades? And what sort of self-determination can they practice when the U.S. res-ponds to protests in the country with assassinations, drone strikes, coups, man-made famines, and sponsor-ship of a genocidal war?

How can we convince ourselves that we live in a free and democratic country when the wealth and prosperity of this country is concentrated in a ever-smaller number of hands, and built on the blood, sweat, and tears of the poor people of this world? What sort of country invades other countries in the name of spreading freedom and democracy? What sort of country spies on each and every one of its citizens in the name of national security?

The answer is straightforward, if only we cast aside the prevailing prejudices of our time. Our country is not a truly democratic country, not one in which the vast majority of people have basic freedoms from oppression, hunger, and want, or the ability to democratically decide the course of their lives or the policies of the country. 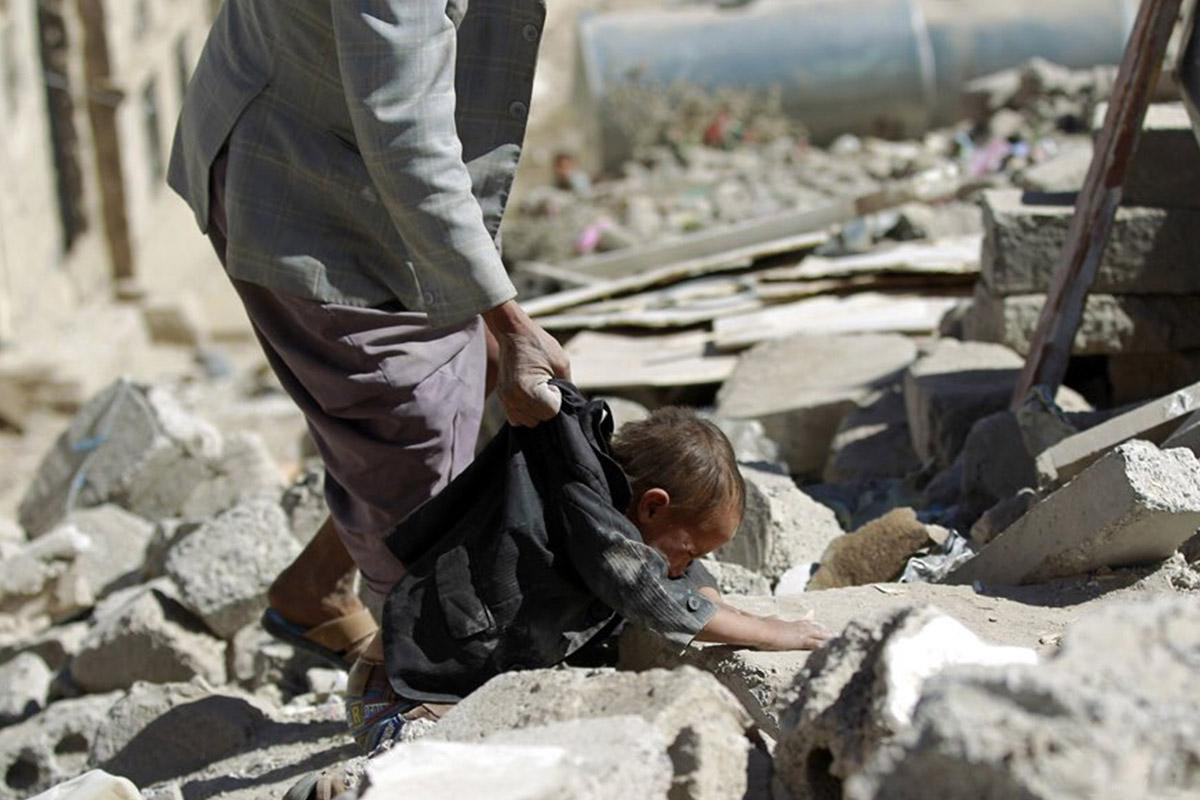 The war in Yemen has been particularly cruel to children. Tens of thousands of kids have already starved to death, and countless others have seen their homes and families destroyed.

Instead, the rulers of this land drum up our support for repressive measures at home and bloody invasions abroad by bombarding us with racist myths and colonial ideology. We are told that the genocidal war in Yemen is needed to curb Iranian influence in the region. If a few million Yemenis die in the process, that is just “the price of peace in our time.” And in view of the rulers of this country, the lives of Arab people, especially poor Arab people, are cheap and expendable. We need only remember the recent history of this country and the invasion of Iraq to recall this. These are the racist and colonial views of the leaders of the most powerful and blood-thirsty empire in the world today, the American Empire.

The question for us, the broad masses of people of this country, is if we are willing to accept and adopt these biases ourselves. If we sit by idly and accept this colonial logic then we too will be shackled, both mentally, politically, and ideologically. Just look at the Patriot Act and other legislation on domestic surveillance. These massive attacks on the basic constitutional and democratic rights of the people of this country have been justified based on racist lies and fear-mongering. We are taught to see all Muslims as potential terrorists, as jihadists in the making. We are told to fear them, to watch them closely, and “if you see something, say some-thing.” And now, in-creasingly, we are all treated as potential crim-inals and terrorists.

We should see, we must see, that if we do not rise up in support of our oppressed brothers and sisters in Yemen, and around the world, we too will become shackled. The rulers of this country, who keep so many in chains, seek to rally us in support for their genocidal policies and their neocolonial practices. They claim that they will keep us safe from the poor people around the world, if we only surrender the rights and freedoms which we and our ancestors fought so hard to win. They tell us that the poor people around the world hate us and want to kill us, when really they hate the rulers of this country who oppress them.

If we cannot see through these lies, then we too will be enslaved, and we too will be condemned to a life of abject poverty and suffering while the rulers of this country laugh all the way to the bank. 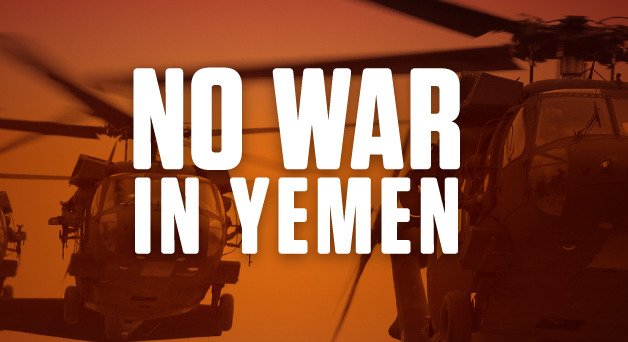