The ongoing genocidal war in Yemen has pushed 14 million people to the brink of starvation. Over 85,000 children have already starved to death, and death tolls from the war are rising every day. Meanwhile, the U.S. continues to supply bombs, planes, intelligence, and more to the Saudi-UAE coalition waging the war at their behest. School buses, funerals, agricultural fields, hospitals, and water treatment plants have routinely been targeted in bombing raids. 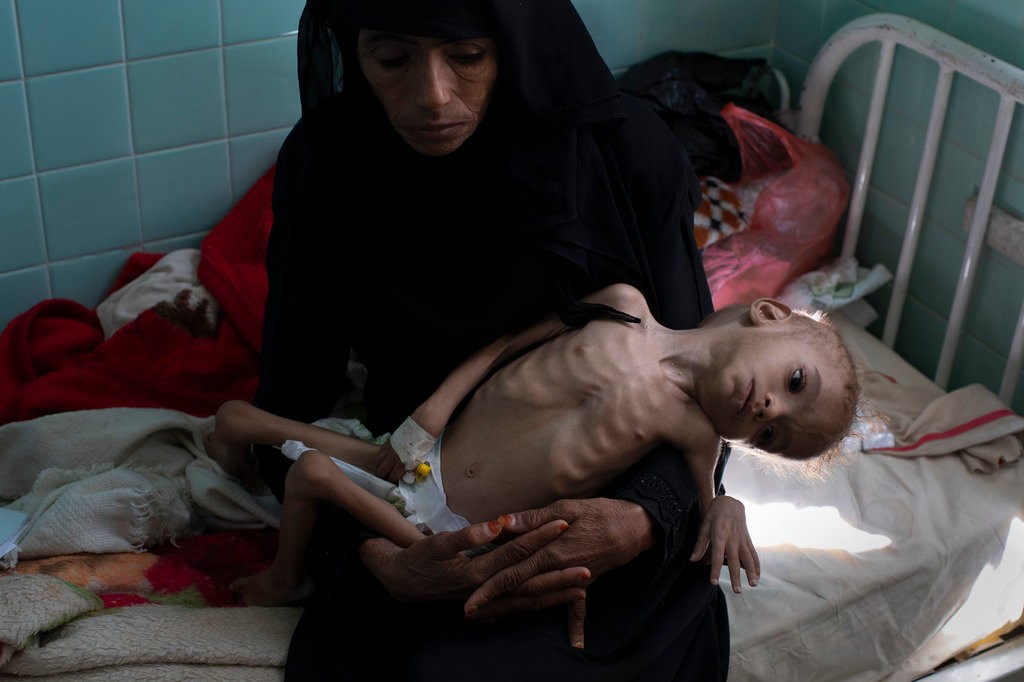 Recently there has been a frenzy of international press coverage of the brutal murder and dismemberment of Jamal Khashoggi, a Saudi dissident and Washington Post journalist. Khashoggi was lured into the Saudi Arabian consulate in Istanbul, Turkey and killed by a hit squad on orders from the Saudi Crown Prince Mohammad bin Salman. The international outcry over this assassination has led to increased focus on and scrutiny of Saudi Arabia’s other policies, including its role in the war in Yemen.

Likewise, countries such as the United States, which maintain close ties with the Saudi government have also faced public backlash for supporting this brutal regime. This in turn has highlighted the barbarism of governments like the United States which have countries like the Saudis and United Arab Emirates (UAE) carry out their dirty work.

Yemen is the poorest country in the Arab world, and has a population of around twenty-eight million. According to a recent study, at least sixteen million people in the country are on the verge of famine as a direct result of the war. While the Saudi-UAE led coalition is dropping the bombs and firing the bullets, they are supported and directed in their efforts by the U.S., U.K., and France.

The U.S. government in particular provides logistical support, intelligence, bombs, bullets, guns, and even in-flight refueling for the coalition. In short, they support this barbaric war at every level. Even the genocidal strategy of blockading Yemen and depriving the people of food, clean water, and medicine was developed in consultation with U.S. intelligence and military advisers.

While the war officially began in 2015, it is actually a continuation of a long-standing policy of U.S. intervention in Yemen politically, economically, and militarily. These interventions have been necessary to maintain U.S. capitalists’ dominance over the Yemeni people. The U.S. conducted its first drone strike in Yemen in 2002, as part of the War on Terror, which has actually been a War of Terror on the oppressed and exploited people of the world. Since this point U.S. drones have flown in the skies of Yemen, and terrorized the people.

This is part of the U.S. government’s long-term strategic interests in controlling Yemen. The country sits at a key point next to the Red Sea, and approximately ten percent of the world’s seaborne oil flows through Bab el-Mandeb, the strait which connects the Red Sea to the Gulf of Aden. This strategic location has been a major factor in the U.S.’s long-standing efforts to control the government of Yemen. 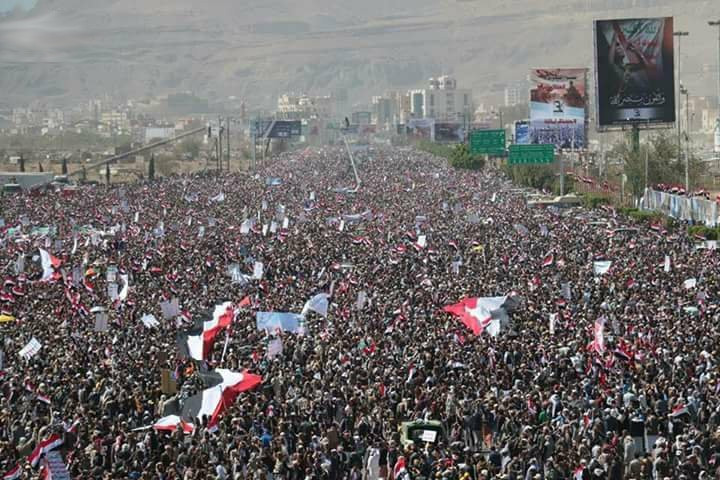 A 2015 protest in Yemen against the Saudi-UAE airstrikes in the country.

The Yemeni peoples' decades-long resistance to foreign capitalist interests and local oppressive forces has pushed the U.S. to intervene in Yemen on an ongoing basis over the past decades. This came to a head when, in 2011 as part of the Arab Spring, the Yemeni people’s resistance developed into a much larger mass movement. The people of Yemen rose in protest against the corrupt and un-democratic government of Ali Abdullah Saleh, who had served as president of the country since 1990, and for twelve years prior served as President of North Yemen.

During his presidency, Saleh had a well-established practice of serving as a lackey for foreign capitalists and the U.S. in particular. He amassed tens of billions of dollars in wealth through outright corruption and bribery from foreign countries and corporations who paid him handsomely to ensure their control of Yemen’s oil and other resources. His government also facilitated foreign control of the profits produced by the blood, sweat, and tears of the Yemeni people. While the vast majority of Yemenis scraped by with barely enough to make it day to day, Saleh, his government, and foreign capitalists—in particular those from the U.S., Saudi Arabia, and UAE—made billions.

During the Arab Spring, the Yemeni people rose in opposition to Saleh’s government and its foreign sponsors, forcing him from office. His Vice President, Abdrabbuh Mansur Hadi, temporarily took over leadership of the government. This changing of the guard was orchestrated by the U.S. and Saudi Arabian governments in the hopes that it would quell protests without upending their control of the corrupt and despotic government. However, in 2014 Hadi was driven from office after trying to force austerity measures down the throats of the Yemeni people. These measures came at the behest of his foreign masters, who wanted Hadi to cut various social benefits for the people, including a domestic fuel subsidy in return for a loan from the International Monetary Fund (IMF). The Yemeni people took to the streets for days and brought the government to a standstill. This heroic resistance shook the foundations of the government and startled its foreign sponsors.

However, the mass opposition to these austerity measures provided an opening to the Houthis to capitalize on. The Houthis are a Shi’a group who have been waging an insurgency in the country for decades. During the upheavals and instability of the Arab Spring they gained ground in their military campaign. These successes were aided by military and logistical support from the Iranian government, which sought to gain a foothold in the Arabian Peninsula and challenge the regional dominance of Saudi Arabia. What’s more, control of Bab el-Mandeb would provide Iran with international leverage as they could threaten to blockade both this strait and the Strait of Hormuz and thus cripple the flow of oil globally. Given Iran’s expansionist aims, and military inferiority to the U.S. and NATO, it needs to have various asymmetrical military options at hand. Blockading these straits is one way that Iran can threaten retaliation against a U.S. military strike. 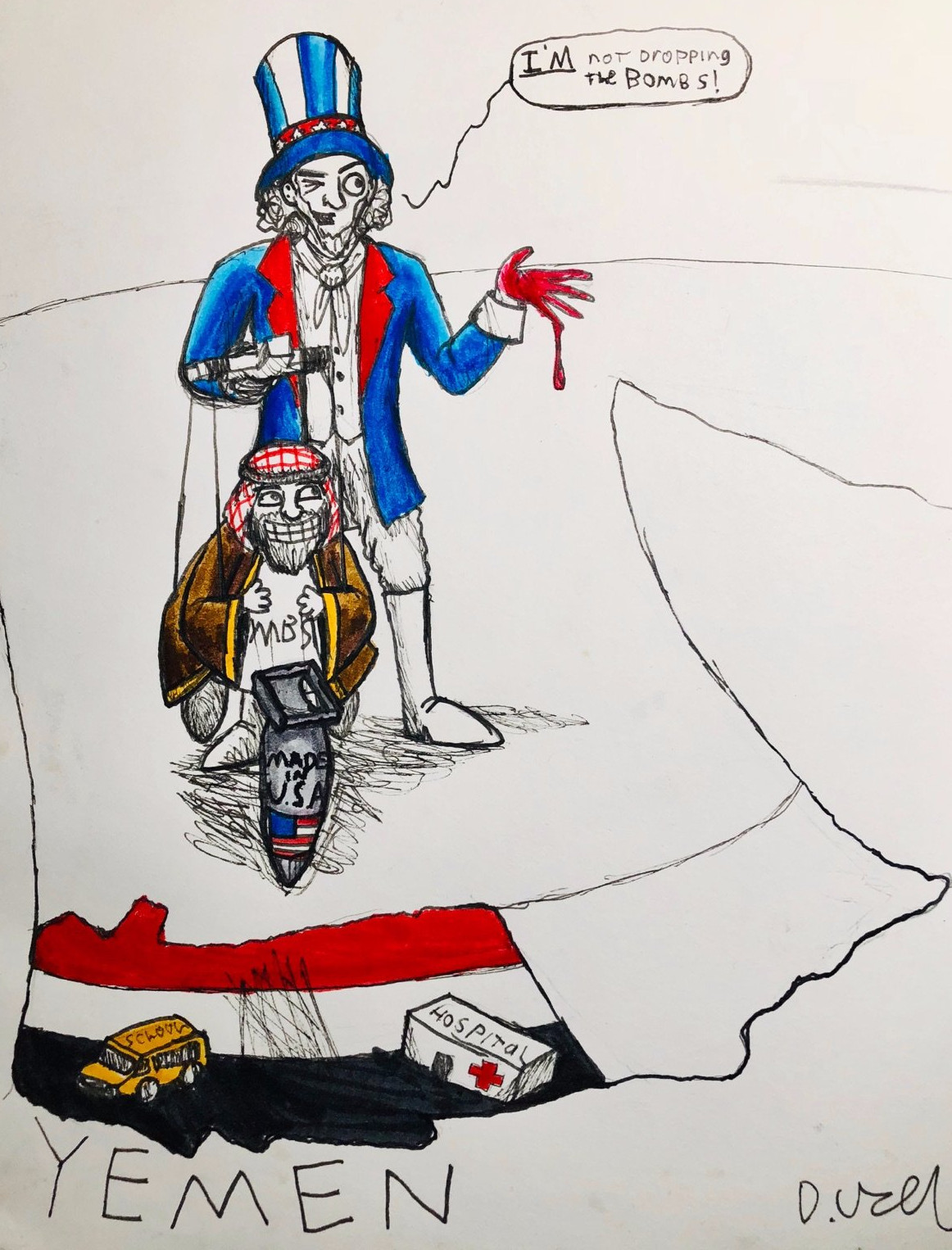 These means are particularly important because Iran is not yet a nuclear power. What’s more China has built its first overseas military base in Djibouti, which lies just across the Red Sea from Yemen. This context helps to frame the larger geopolitical significance of the war in Yemen. So, when the Yemeni people rose up against Hadi’s government in the fall of 2014, the Houthis were able to march into Sana’a, the capital of Yemen and take control of the government.

Hadi fled to Saudi Arabia in early 2015 to seek support from the Saudi govern-ment and Western Imperialist powers for a military campaign to drive the Houthis from Yemen. The Saudis and UAE quickly formed a military co-alition with a number of other countries in the region in-cluding Qatar, Egypt, Bahrain, Morocco, Jordan, Sudan, and Kuwait. At this point the War in Yemen began in earnest.

While soldiers from these countries are fighting on the front lines of the war, a number of Western imperialist powers—including the U.S., U.K., and France—have effect-ively orchestrated the military campaign and supplied the necessary equipment. Without intelligence, military planning, planes, bombs, in-flight re-fueling, guns, bullets, and other support from these countries, the coalition could not carry out the war in Yemen.

After the initial in-vasion of Yemen—and co-rresponding air strikes—was unable to defeat the Houthis, the coalition developed a new strategy in coordination with the U.S., U.K., and France. They aimed to blockade the country and unleash a wave of brutal terror against the people of Yemen. The coalition began indiscriminately bombing schools, hospitals, water treat-ment plants, and school buses full of children. This is a genocidal strategy which clearly shows that the Saudi-UAE coalition and their Western Imperialist sponsors would rather kill tens of millions of people than let Yemen slip from their clutches.

The long history of imperialist domination of Yemen prevented the country from developing a self-suffi-cient economy, thus leaving it heavily dependent on imports from foreign countries for basic necessities like food and medicine. This has exacer-bated the impact of the blockade and led to a deva-stating crisis. A recent study estimated that since 2016 at least 80,000 civilians have died from bombing and military campaign alone. Another study found that over 50,000 children have already died of starvation in Yemen in 2017 alone. Over a million people in the country have Cholera because of the systematic and widespread lack of access to clean water, and another 22 million are at high risk to contract the disease. UN aid chief Mark Lowcock recently stated that at least 14 million people in the country are on the verge of famine. 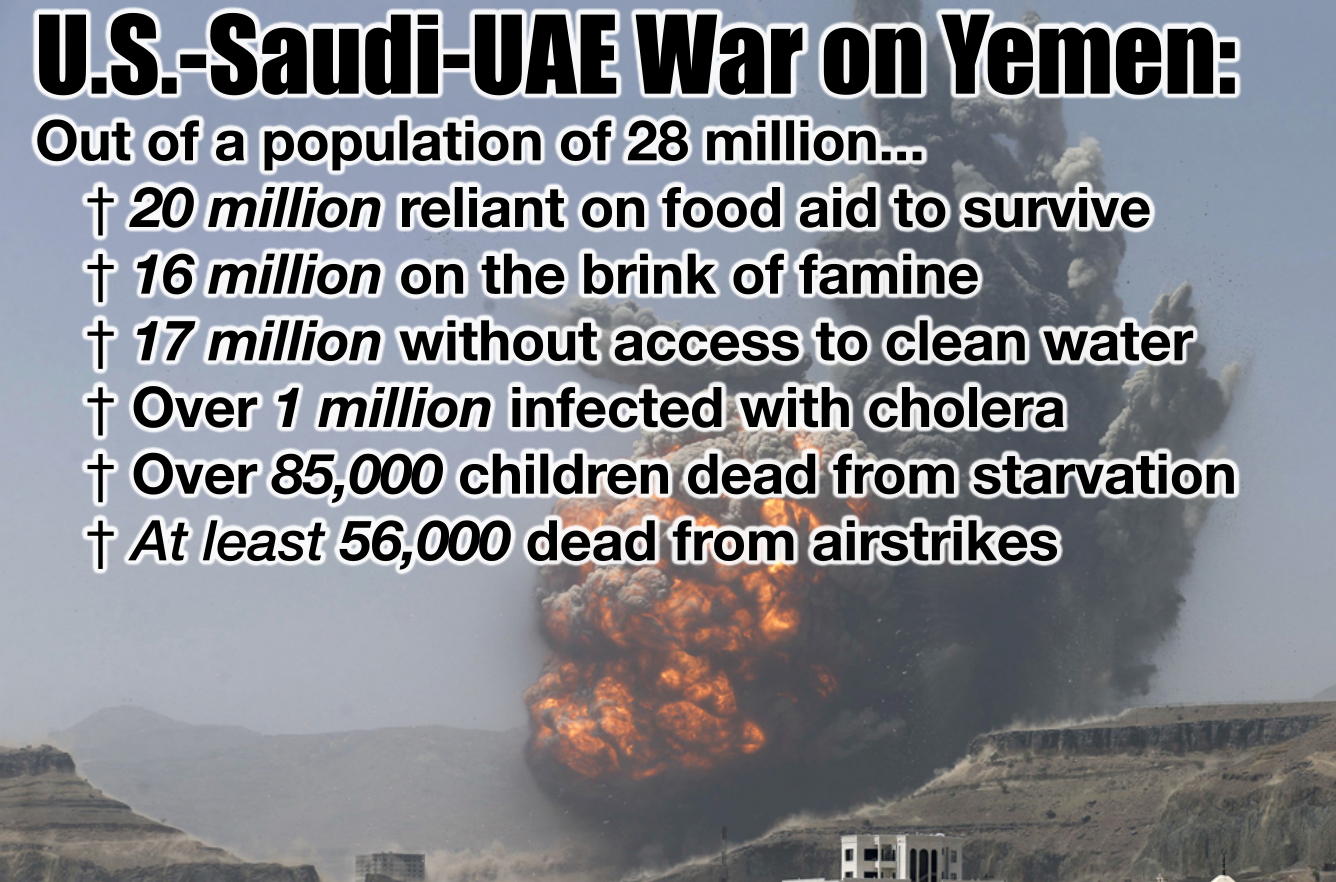 These statistics help to paint a picture of the brutality of this war and demonstrate the impact of the genocidal strategy of the coalition and its Western Imperialist sponsors. In the wake of the murder of Jamal Khashoggi, the recent increased international focus on Saudi Arabia has put a spotlight on the war in Yemen. As a result, people here in the U.S. and around the world are beginning to mount an opposition to the US government’s support for this war and their deep ties with the Saudi government.

For example, students at universities like Harvard, BU, and MIT have begun a struggle against their universities’ ties with the Saudi government. Protests have begun to grow in cities across the U.S. and in other countries as well. These are important steps and can be the beginning of the regrowth of the Anti-War movement in imperialist countries around the world. 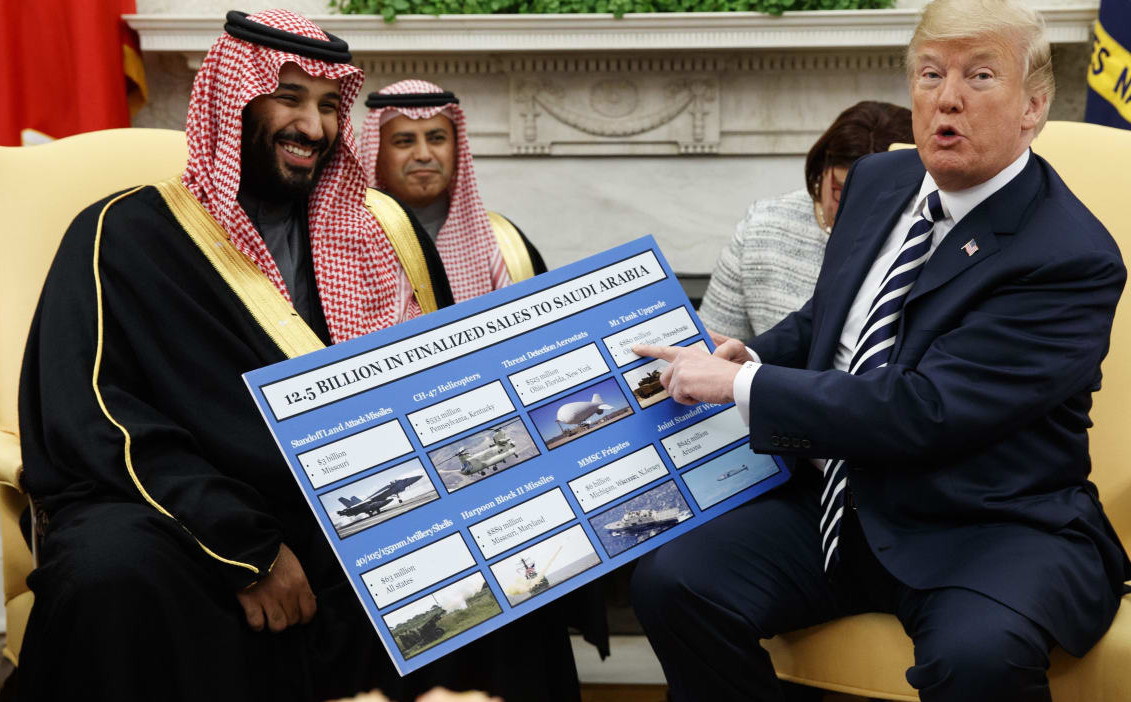 Trump and Saudi Crown Prince MBS get together to brag about the size of a weapons deal that supplies the genocidal war in Yemen.

Growing opposition to the war in Yemen has pushed the U.S. Senate to allow discussion of this issue. In a recent vote they decided to go forward with discussion of a bill to limit U.S. support for the war in Yemen, and the President’s war powers in the conflict. It’s important to see that the Senate, and the U.S. government more broadly, is only moving on this issue because of the significant public pressure, here domestically and internationally. The U.S. government has been behind this war from the start, and helped to orchestrate the strategy of creating famine in the country. Therefore, the movement to oppose the war in Yemen, can’t rely on this same government to play the leading role in stopping to war. In fact, even though the bill passed the Senate, it is unlikely to pass in the House of Representatives, or be signed into law by Trump. This process could take months, and in the meantime, the people of Yemen will continue to starve and die. Only through continued political pressure can the U.S. government be forced to take action to end this war. Therefore, organizing in opposition to this war needs to be seen in this light, as an effort to build a powerful Anti-War movement, and not as a “call your Congressmen” type approach.

As the imperialist and expansionist countries around the war continue to pursue genocidal wars of aggression around the world, there is an urgent need to regenerate the Anti-War movement. This need is particularly acute in the U.S., which has conducted military operations in over 150 countries this year alone, has over 800 military bases around the world, has maintained a military occupation of Afghanistan for over 17 years, and continues to lend support of all kinds to dictatorships like Saudi Arabia to do the “dirty work” for them. The people of this country have a real obligation to practice solidarity with our oppressed and exploited brothers and sisters around the world. 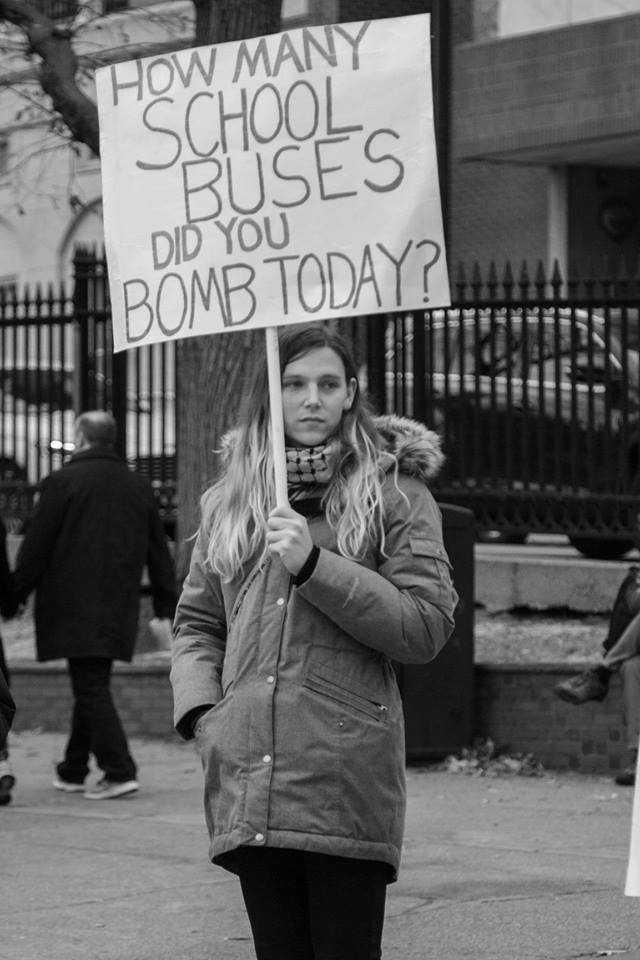