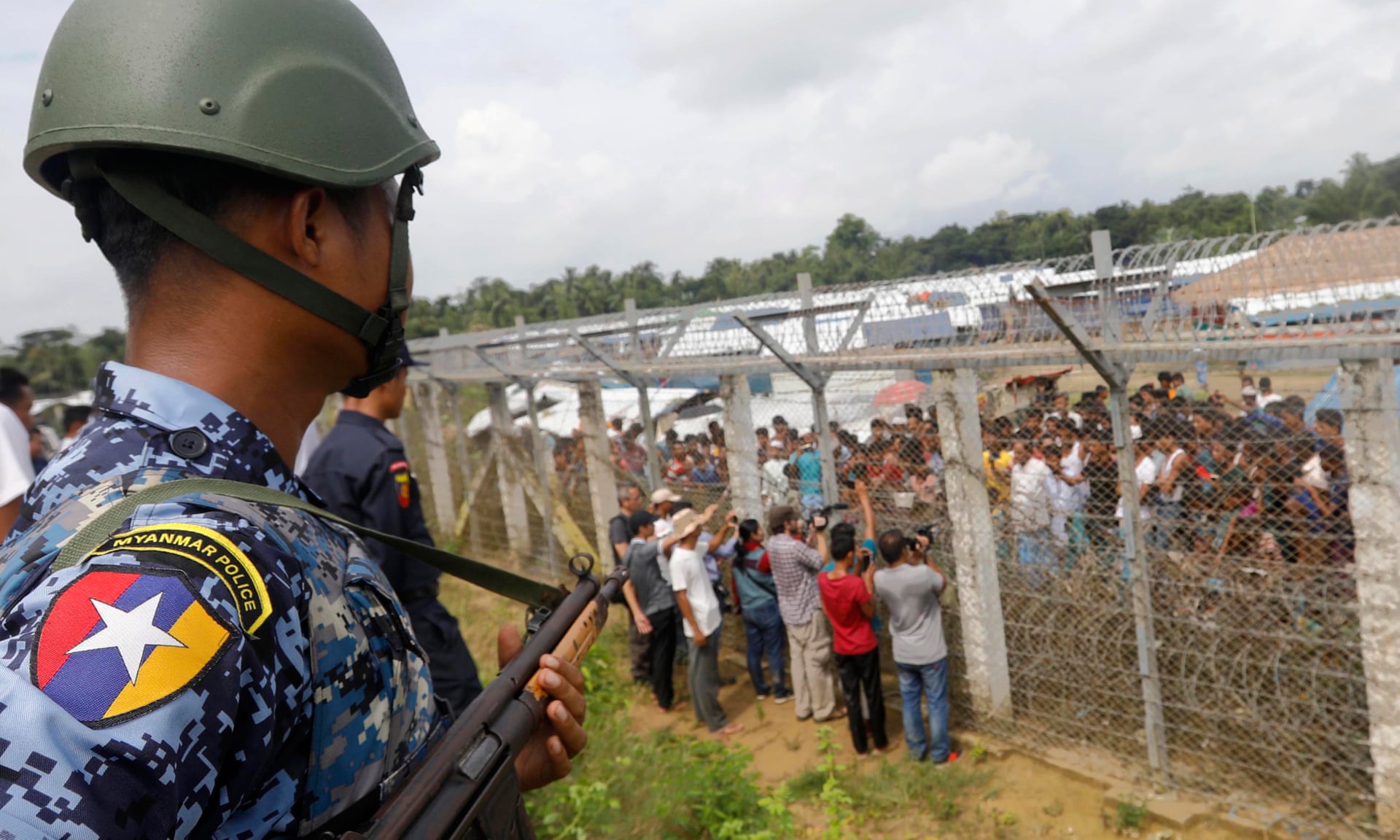 A police officer guards a concentration camp in Myanmar full of Rohingya. Over a million Rohingya have been displaced from their land by the military and police in Myanmar.

The ongoing genocide of the Rohingya People in Rakhine State, Myanmar recently received newfound international recognition after the United Nations (U.N.) issued a report on the ongoing genocide in the country. U.N. reports and resolutions like this are generally not effective at stopping brutal crimes against humanity, but serve to recognize, after a genocide has been going on for some time, what has already happened. The reality is that the Rohingya people have been subject to terrible abuse and attack by the army of Myanmar for decades. This has included mass killings, mass rapes, burning of villages, and forced displacement at gunpoint. The oppression of the Rohingya people in Myanmar has its roots in British colonial rule but it has accelerated and reached new heights under the pressure of major infrastructure projects being built by India and China in Rakhine state, where the Rohingya are concentrated.

This reached a peak in 2016 when more than half of the Rohingyas living in Myanmar were expelled to neighboring Bangladesh amidst widespread violence and destruction. This violence and oppression which has been going on for generations cannot be fully addressed by a U.N. fact-finding mission, but can only be overcome by pro-people organizations and resistance.

The Rohingya are a group who live mainly in Rakhine state, which is located along the western coast of Myanmar. A majority of the Rohingya are Muslims, and they have their own language, cultural traditions, and ways of life. They have long been brutally discriminated against in Myanmar, which has since the time of British rule been run by a ruling class composed of people from the dominant Bamar ethnic group, who make up 68% of the population.

The ruling class has for many years supported a form of Buddhist fascism. They portray the Rohingya and other ethnic minorities in Myanmar as outsiders and the source of problems in the society. They have long spread a lie that the Rohingya are not an ethnic group from the area but instead are recent “illegal immigrants” from Bangladesh. 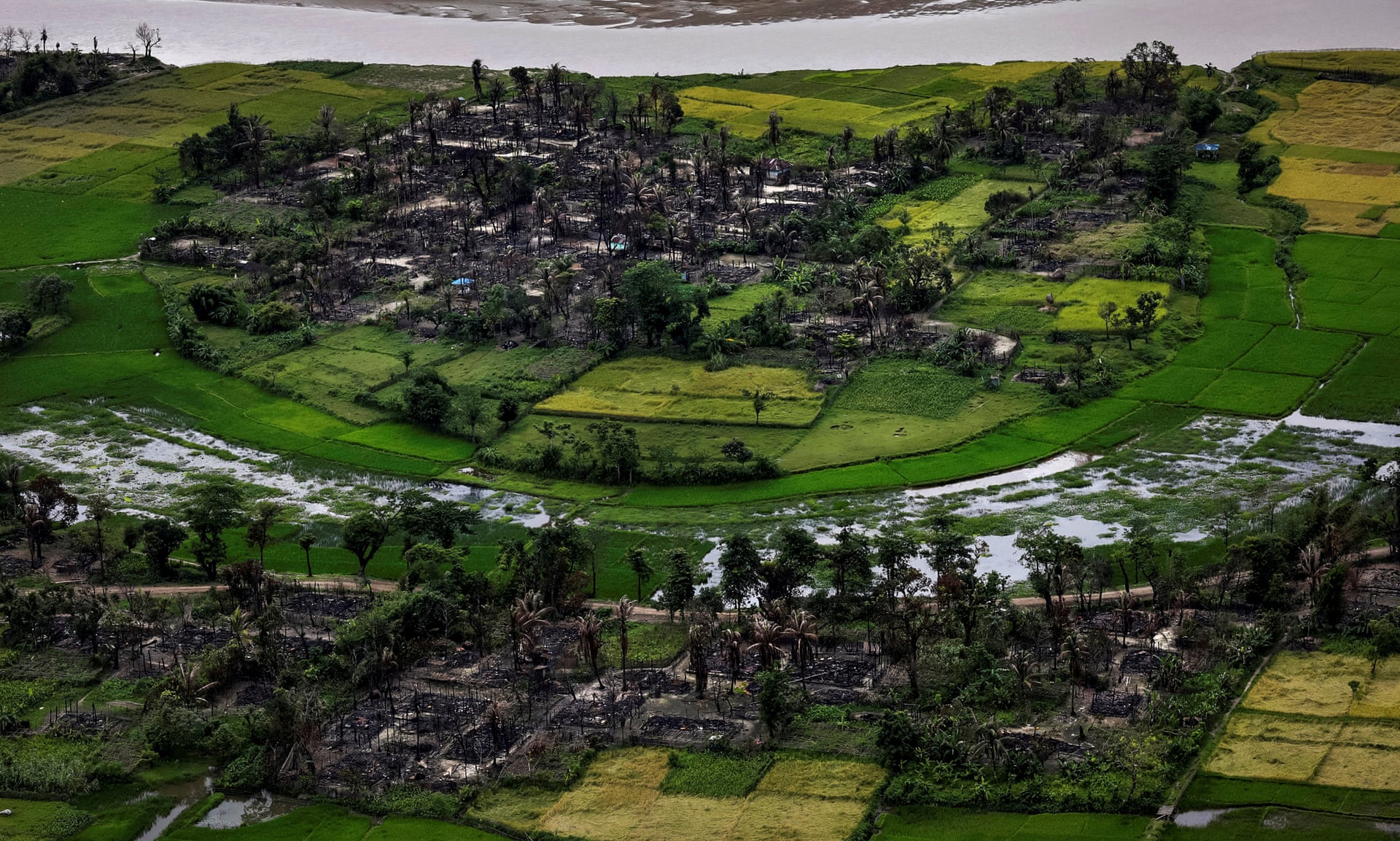 Myanmar troops have burned countless Rohingya villages to the ground as they make way for Chinese and Indian infrastructure projects and other investments.

Many of the Rohingyas live as poor peasants, scraping together a meager existence from what they can produce themselves on the land. The Rohingyas land has put them in the cross-hairs of the ruling class of Myanmar, which wants to carry out infrastructure and development projects on their land. This led to hundreds of thousands of people being displaced in the last two years at gunpoint, with hundreds of thousands fleeing from atrocity after atrocity. Over 600,000 displaced Rohingyas are now living in huge refugee camps in Bangladesh in very desperate conditions with little access to healthcare, food, or clean water. Many described entire villages burnt to the ground, women gang-raped and then murdered, sexual abuse of children, and mass execution. These crimes were carried out by the military of Myanmar in a deliberate campaign to inflict terror upon the Rohingya and force them to flee from the country.

Chinese and Indian infrastructure projects in Rakhine state have contributed a lot to the attacks on the Rohingyas. Myanmar’s strategic location, on the west side of the Bay of Bengal, means it is crucial for India to get further access to markets in South East Asia, such as Thailand and Vietnam. India currently relies on a 1300 mile long land shipping route to get goods to most of Myanmar, even though the Indian city of Kolkata, in West Bengal, is located right across the Bay of Bengal from several cities in Myanmar. 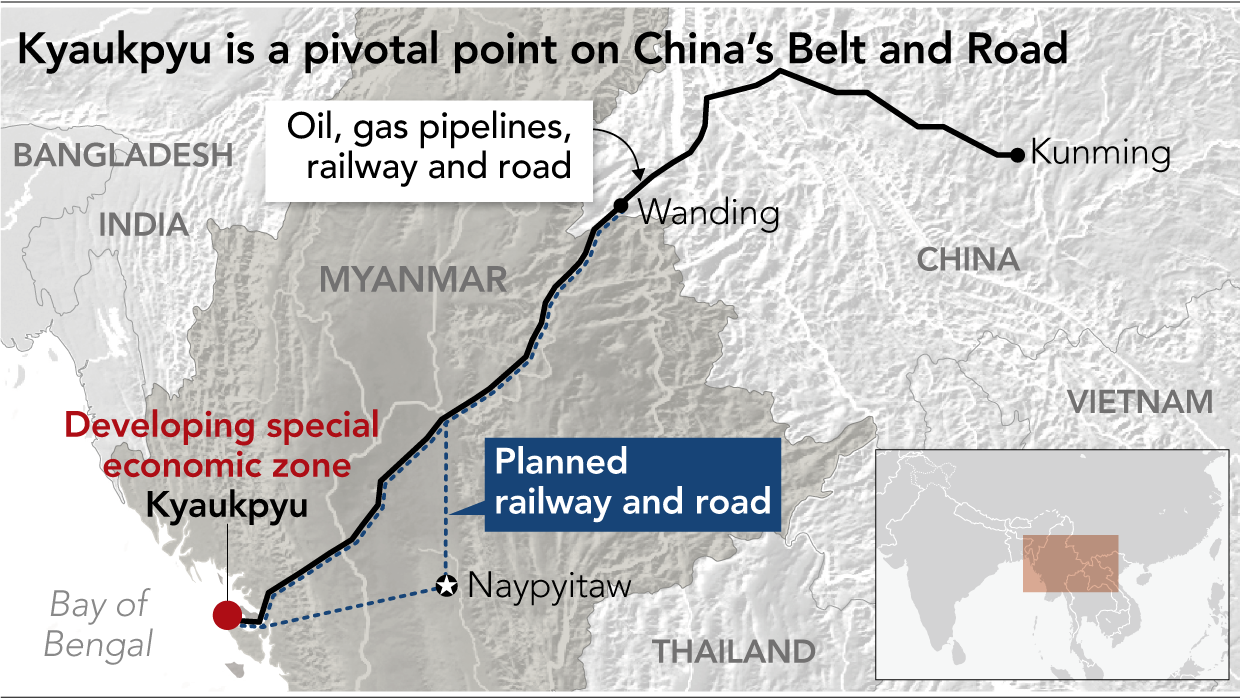 China is working to develop rail and highway connections to their port and other infrastructure in the city of Kyaukpyu, Myanmar. Much of this development is planned on the Rohingya’s land.

India has started to develop and construct a major infrastructure project called the Kaladan Multi-Modal Transport project. It mainly consists of road and highway infrastructure, which will better connect the port city of Kaladan, located in Rakhine state, with the rest of Myanmar. This will let Indian goods reach markets in Myanmar by sea, avoiding the costly and slow land route.

Likewise, for China, which has a long land border with Myanmar, having a sea port on the Bay of Bengal under their control would grant them increased access to markets in South Asia. They have invested $7.3 billion in constructing a deep-sea port in city of Kyaukpyu, also located in Rakhine state. This project also involves the creation of a so-called Special Economic Zone (SEZ). This is essentially an “anything goes” area where Chinese capitalists can set up factories to exploit local workers.

In most SEZ’s around the world the minimum wage laws, work safety rules, and unions that exist in the rest of the country do not apply and foreign companies are able to brutally exploit workers who have next to no legal rights. Chinese capitalists are setting up factories abroad in many African countries as well as they work to find cheap labor and avoid paying rising wages to workers in China.

Although China and India are not cooperating in their projects and are actually competing to control the markets in Myanmar they do both agree about pushing the Rohingyas off their land. Highway and rail projects in a country like Myanmar, especially in an undeveloped region like Rakhine state, take a massive toll on the people. They are often displaced from their land to make way for the new infrastructure. For the people who have been kicked out there is often no choice but to become beggars or to go to work in terribly oppressive factories.

China and India have both benefited from the attacks on the Rohingyas but the displacement and genocide has been carried out and orchestrated by the Myanmar government. The current Prime Minister is Aung San Suu Kyi, who once received a Nobel “Peace Prize.” Her government’s army has orchestrated this brutal campaign.

The Myanmar government with the help of the imperialist Chinese government and the expansionist Indian government is actively suppressing efforts to report on the atrocities and provide humanitarian support. For the government of Myanmar appeasing foreign investors is more important than the lives of the Rohingya. To oppose this destructive, genocidal military campaign it’s essential that a pro-people force develop to fight for the survival of the Rohingya people. 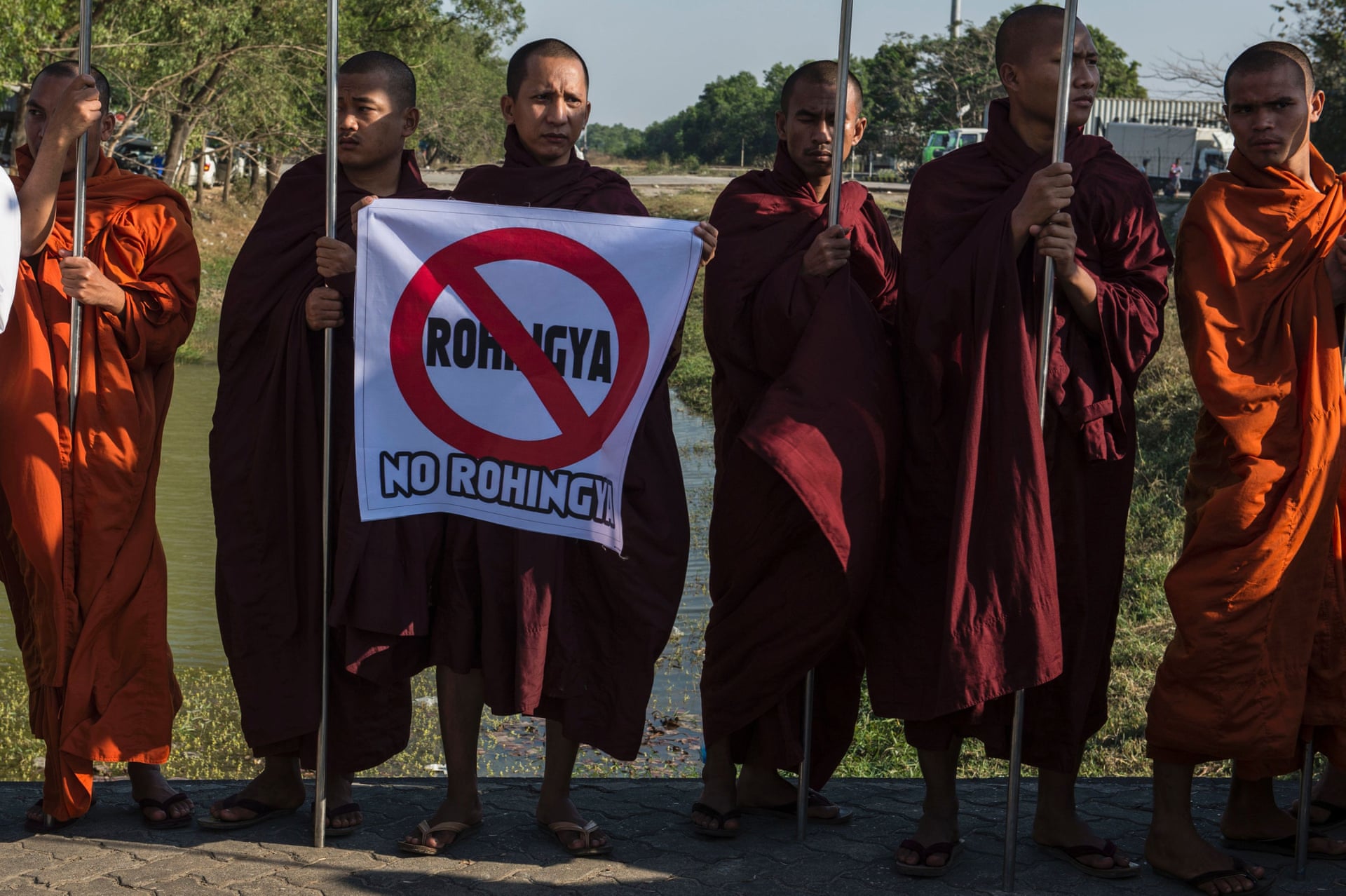 Burmese Buddhist Monks protest against the arrival of a shipful of food and other aid for the Rohingya. This sort of fascist oppostion to the Rohingya is common.

The Burmese ruling class justifies its genocidal attacks on the Rohingyas by whipping up Buddhist nationalism and Islamophobia. The existence of Buddhist nationalism in Myanmar goes back to British colonial rule during the 1860s, when the British ruling class sought to strengthen their grip on what was then known as British India by encouraging division and discord along national and religious lines.

During this era it was common to see slogans for nationalist and religious organizations such as “to be Burmese is to be Buddhist,” in spite of the existence of a large Muslim minority in the country. Buddhist nationalism was further cemented with the drafting of the Pang long Agreement. This document was drafted in 1947 by Aung San Suu Kyi’s father, Gen. Aung San, after a conference between major ethnic groups about the future of the country after independence from Britain.

It officially set down the recognized ethnicities of Burma, as Myanmar was then known, and decided which peoples living in the geographical area would receive citizenship in the newly independent state. Even though the Rohingyas were living in Rakhine state at the time and had been for generations they were left off of this list and never received citizenship in the new country. 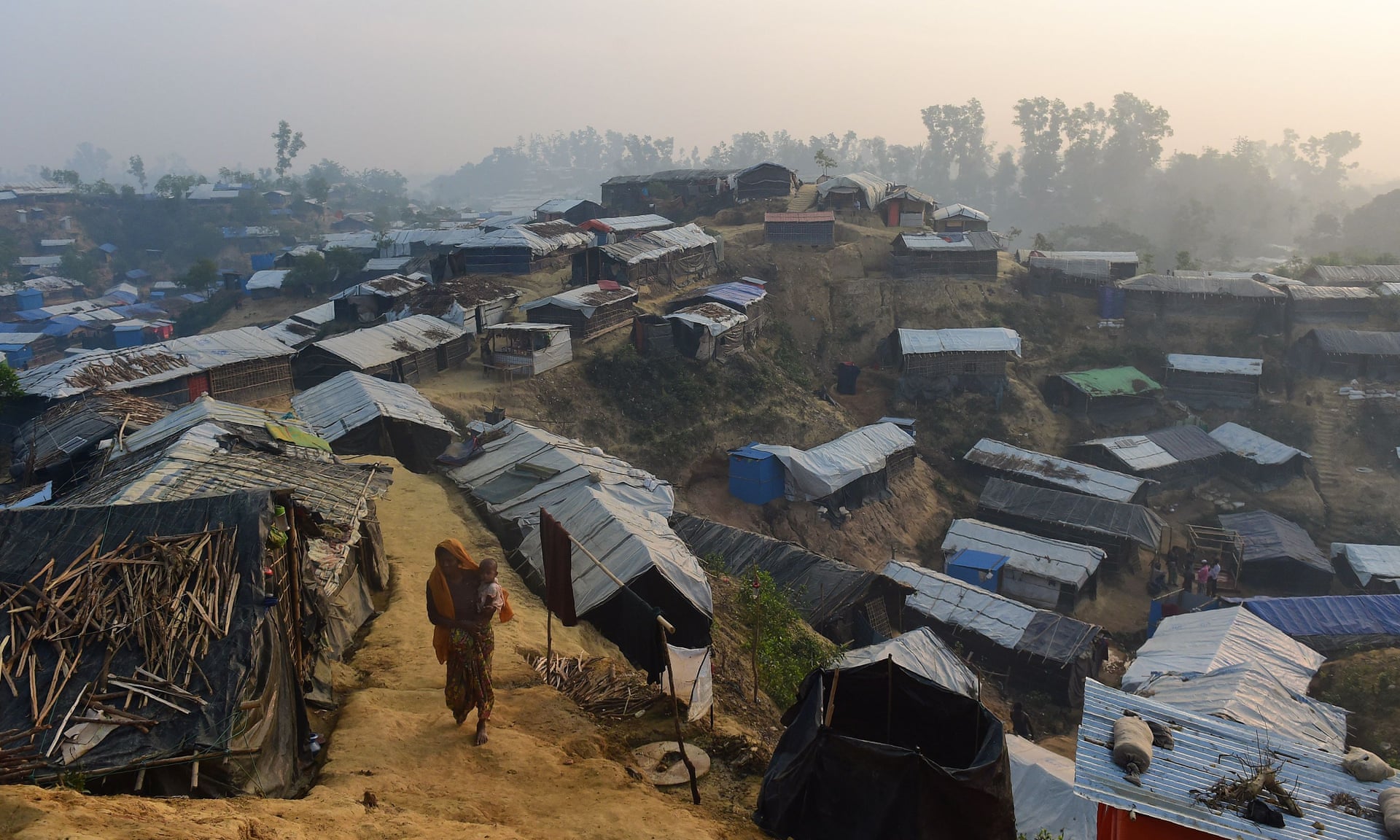 Hundreds of thousands of Rohingyas have been forced into refugee camps in Bangladesh where they live in makeshift shelters in abject poverty.

Even more recently the Burmese military junta again left the Rohingya out of a second citizenship list in 1982. Many of the ruling class and their ideologues and supporters insist that the Rohingya are actually Bengali people who were “illegal immigrants” during the time of British rule. This constant refusal to acknowledge the Rohingyas’ existence as a people ultimately justifies the brutal violence which they have faced.

Islamophobia has also contributed to the attacks on the Rohingya. The U.S. “war on terror” has provided justification for many countries to attack Muslim minority groups by painting them as terrorists. For the ruling class in India this has been a key way to drum up xenophobic feelings towards the oppressed Muslim-majority population in Kashmir where there has been an armed separatist movement for decades. The ruling class in Myanmar has eagerly taken this up and has cooked up fake stories about Rohingyas visiting Afghanistan and Libya for “terrorist training.” 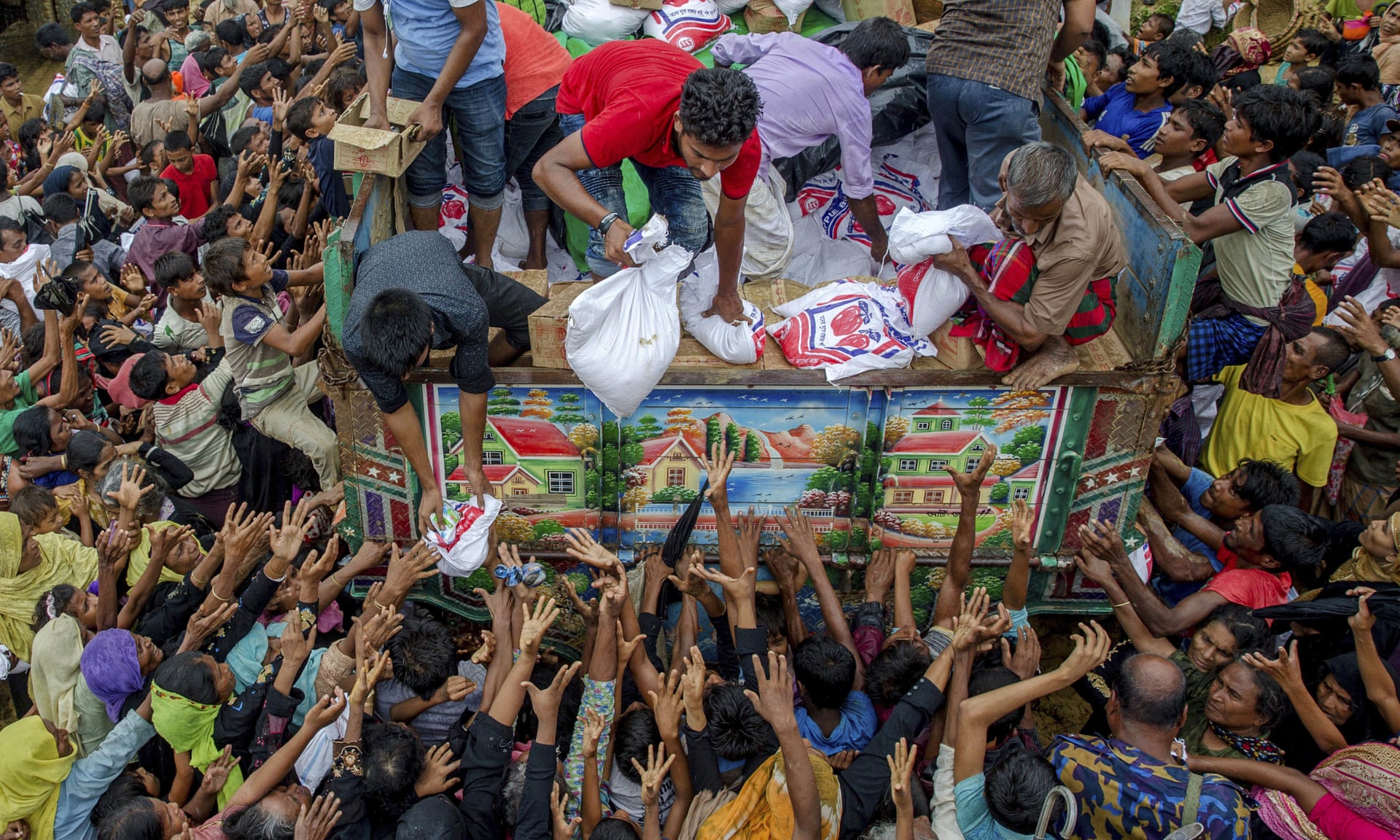 Rohingyas clamor for food in a refugee camp in Bangladesh. Food and other basic necessities are incredibly scarce in these camps.

Many international leaders have prodded Aung Sn Suu Kyi, the leader of Myanmar, to condemn the violence against the Rohingyas. She has so far refused to do so, which reveals that waiting for her and various imperialist interests to address the situation cannot be on the table. Instead, serious, long-term organizational efforts, including among the Rohingya people are the only way forward. The peoples of Myanmar can arm themselves to defend against the ongoing attacks, and they can organize collective resistance to the government of Myanmar and to imperialist powers like China and the U.S. This is a struggle itself to accomplish but this type of organization can fight against all forces which seek to subjugate and destroy the Rohingya.

NGO groups like Doctors without Borders and the Red Cross have been ineffective at helping the situation, as the Myanmar government has expelled them from the country. These types of NGO groups also only treat the symptom of a rotten situation. They provide medical aid or food, to address some of the people’s needs, but they generally oppose and even sometimes work to sabotage people’s efforts to organize for self-defense and to ultimately overthrow their oppressors. So it’s important for a pro-people force to develop, which can methodically work to resist the attacks of the Burmese military. 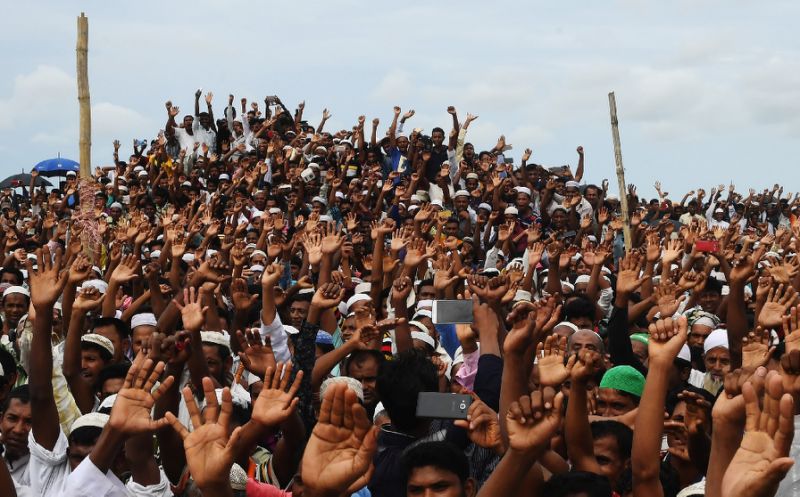 Over 40,000 Rohingya joined in a protest on August 25, 2018 in the Kutupalong Refugee Camp in Bangladesh, which is now the largest refugee camp in the world.

Myanmar Buddhist nationalism and the economic interests of China and India have led to the displacement the Rohingya people. There has been some push back from the bourgeois international community and the UN. However, these efforts have only addressed the surface level problems at hand, and have only retroactively recognized the suffering of the Rohingya, after some of the very worst crimes have already been committed.

The result is hundreds of thousands of Rohingya refugees living in destitute camps in Bangladesh with thousands of people still fleeing across the border from Myanmar into Bangladesh every day. To change this situation the Rohingya and those who want to support their struggle internationally cannot be content with U.N. resolutions and condemnations from international aid groups. We have to support pro-people resistance movements developed among the peoples of Myanmar. While these movements may be small at the present moment, they can develop into a mighty force capable of overcoming their oppressors and liberating the Rohingya and other people from the domination of the government of Myanmar and the plague of foreign imperialist investment and development.