As city governments in the Bay Area work hand-in-glove with wealthy capitalist “developers” to gentrify the area and evict the homeless, RUF has been organizing resistance in the encampments. Residents in several West Oakland encampments are once again facing displacement after defeating prior eviction attempts. The city government has been trying to force people into “Tuff Sheds,” but the homeless have described these as concentration camps and said “Hell No! We Won’t Go!" 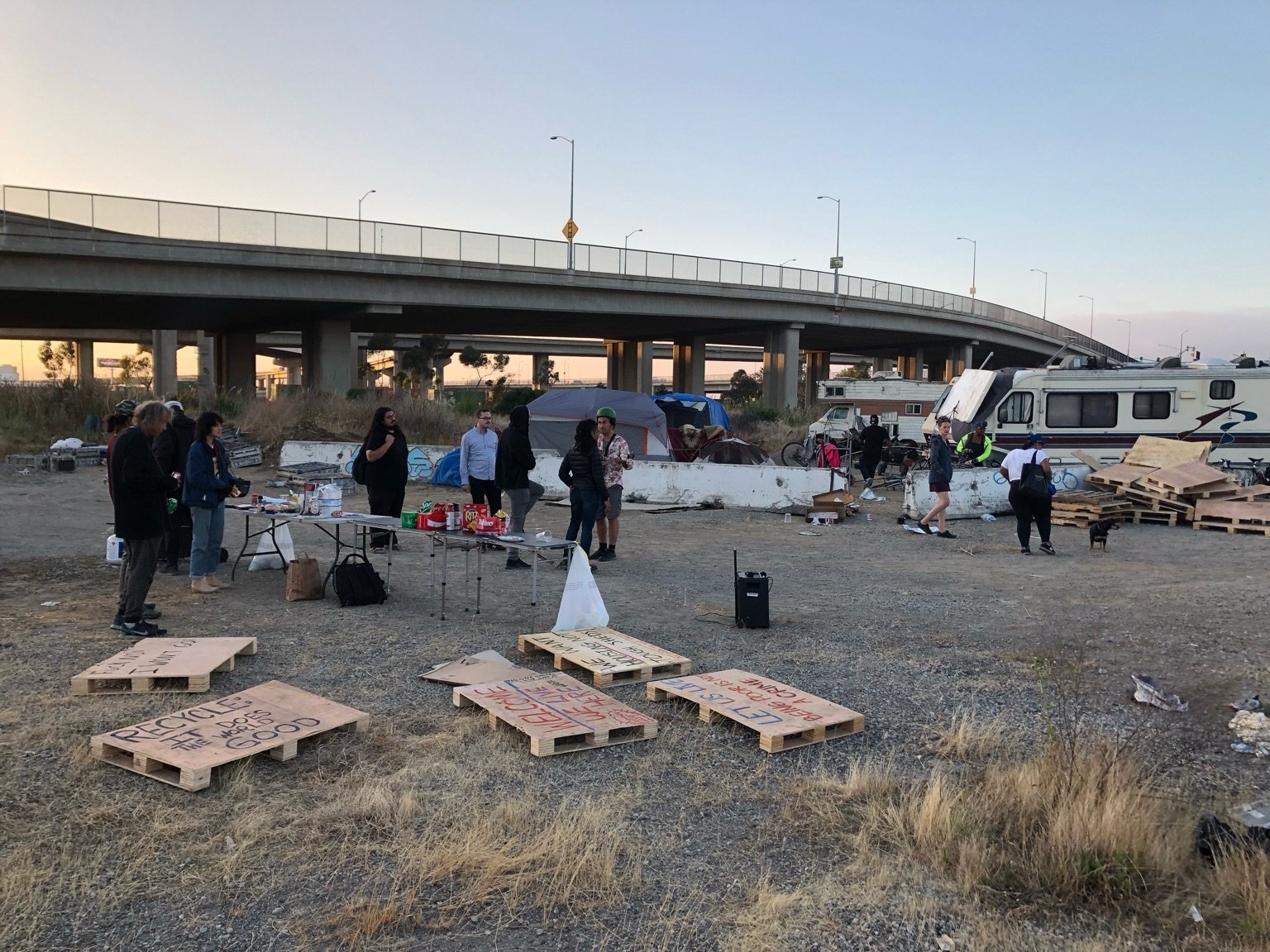 A community cookout in a West Oakland encampment. These cookouts have been a key way to rally the people to resist evictions and displacement.

The Bay Area Branch of RUF has been working for over a year to build popular resistance in some West Oakland Homeless encampments. This work has required building relationships with the local residents; regularly visiting the area, talking to the homeless about the situation, and asking people what they genuinely think can be done to improve their situation.

The overall situation is very dire. In Oakland alone, there are almost 10,000 people sleeping on the streets every night. The majority of residents were once renting a home somewhere in Oakland. People lose their housing from a large range of factors; layoffs, medical bills, incarceration, substance abuse, or domestic violence. As the situation for working people becomes more harsh in this country, the average person is less and less able to recover from any kind of financial instability. The soaring cost of housing means that once most people lose their housing, it’s unlikely they will find another unit that they can afford. First and last month’s rent, plus a security deposit adds up to thousands of dollars, and is more than most people have saved up.

After losing their housing, many often try to live in their cars or live with friends or extended family. But all too often this isn’t sustainable. All too often, parking tickets pile up and the vehicle (the last bit of shelter) gets towed and all they have left is living on the street.

People’s troubles only increase when they become homeless. Local law enforcement, eager to keep the streets “clean” for the wealthy newcomers and private businesses, threaten people with arrest and property confiscation. This action of sweeping homeless people out of public view is what causes the formation of encampments. In West Oakland, these encampments sit on vacant lots near the edge of the bay. Conditions in encampments can often be very poor, while people come together in small ways to support one another, there is a limited ability to maintain sanitary conditions. Homeless encampments are even targets of serious illegal dumping by surrounding businesses or housed residents. 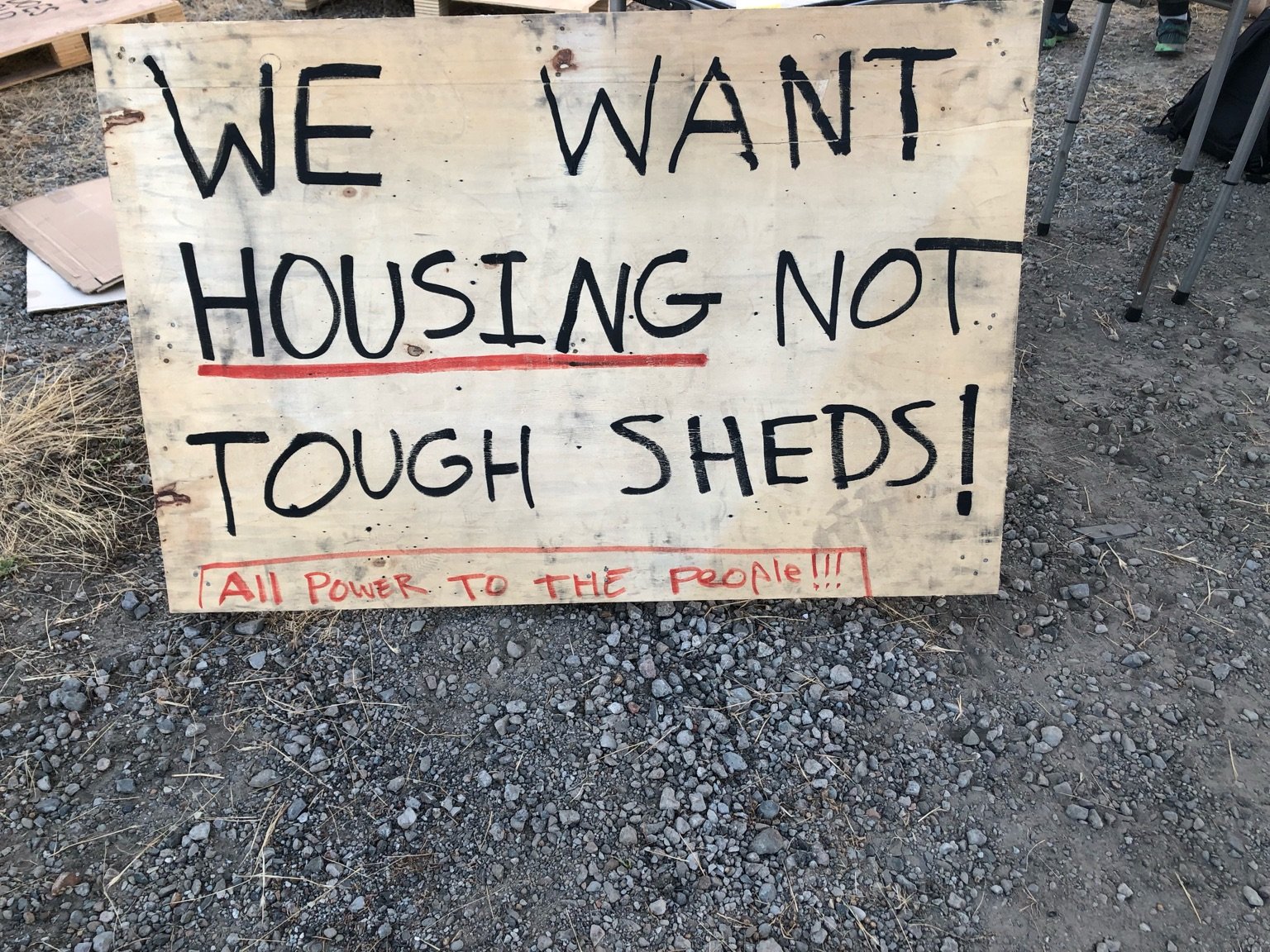 A sign made during one of the cookouts in an encampment. Homeless residents in the area are outraged at being pushed into the Tuff Sheds.

These settlements are in contradiction with the long term plans of the city and business interests; which sees the “underutilized” land as a real estate development opportunity, a way to make a quick profit. Ultimately, the city of Oakland will move to evict everyone living there, so that developers can begin construction on those properties.

Last October, six Oakland police officers attempted to evict the residents of a lot on Wood street. RUF and local residents worked to form a picket line and the police temporarily held off its eviction plan. While this victory proves the power of even a small amount of resistance, many issues remain. It has been an ongoing struggle to summarize the lessons of the last struggle and mount a sustained defense against future evictions. Additionally, the RUF Bay Area Branch is small and there are related limitations on its ability to educate and work amongst the masses. As the city moves to try and evict the residents again, RUF is making efforts to bring activists from other struggles into this resistance. The residents must prepare for the coming evictions but there is a great need for people from other struggles to come together in resistance.

As the threat against the settlements develops, RUF is working to bring residents together to create a plan of action. Comrades put money together to plan dinners in the area and visit to speak with residents weekly.

Many of the West Oakland encampments sit on over 120 acres of vacant and abandoned lots on the cities western waterfront. Much of this land was formerly used by local industry and shipping companies that have since left the East Bay. The City of Oakland has spent the last few years rezoning this land so that is may be used for residential and commercial purposes. Many real estate developers have since purchased these vacant lots in the hope of developing luxury apartments for the wealthy.

As these developers attempt to build on these lots, the city exerts immense pressure to kick out the homeless people already living there. One major component of the cities strategy to remove poor people is the hasty creation of temporary “housing” near homeless encampments. This temporary housing serve as little more than concentration camps, where poor people have to surrender their rights as tenants, live in cramped tool sheds, with a roommate (most often a total stranger), with rules similar to a halfway-house. Residents must sign in and out when entering and exiting, and the facilities are monitored by armed guards and surrounded by a high fence.

Residents are subject to strict rules, with limited ability to have guests and with most infractions leading to immediate eviction from the “tuff sheds” with little to no grievance process. Additionally, the residents can only live in these sheds for a maximum of 90 days, if they are not connected to a different housing program or find their own housing, they are ejected back onto the street. While these shelters may seem like a temporary reprieve from the streets, people have less freedom, they lack the personal networks that people rely on on the streets, and the institution itself often increases the instability in a person’s life rather then solves any of their long term issues. 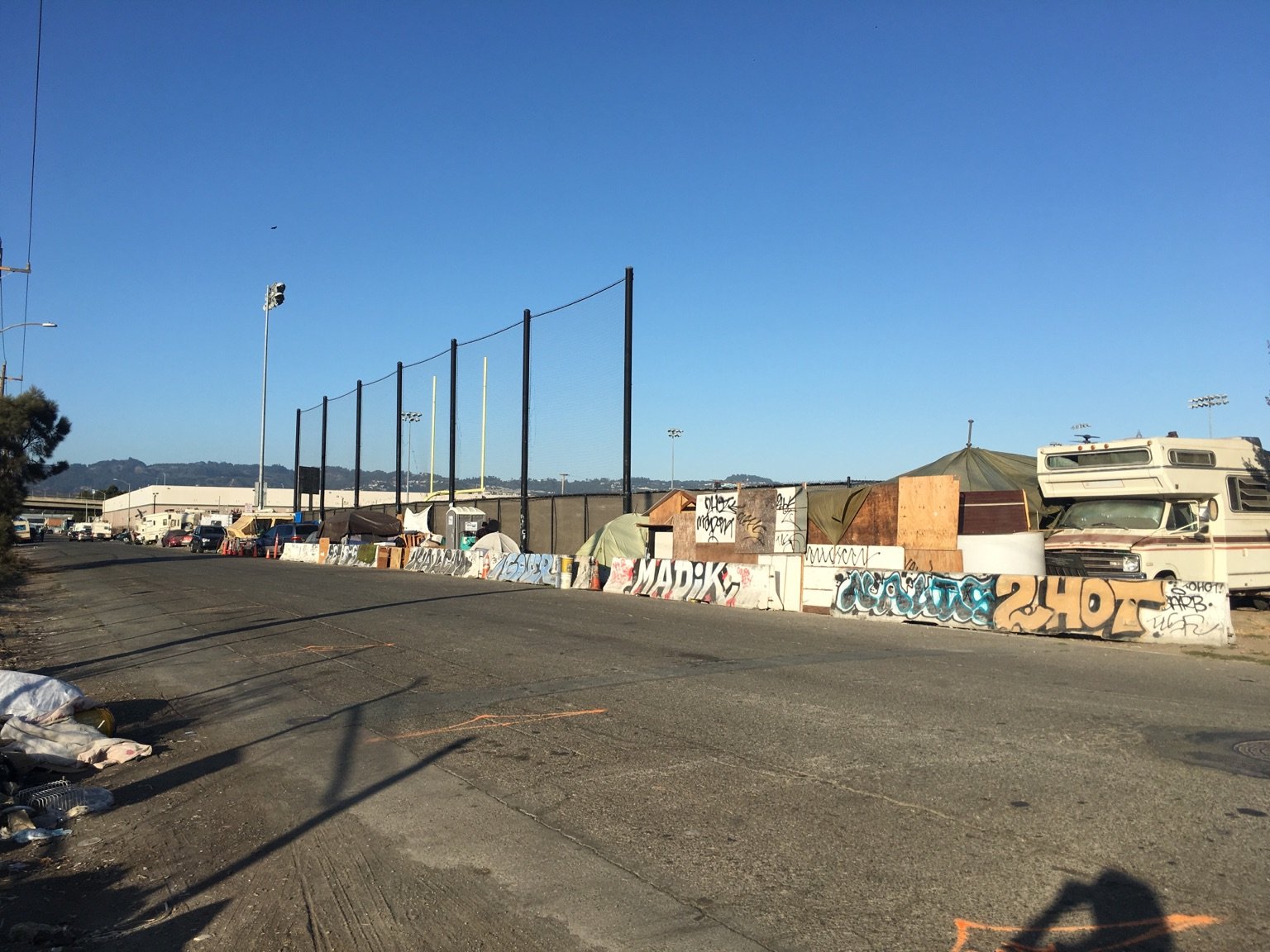 Police recently relocated a West Oakland encampent onto a busy shipping road right next to a soccer field. Residents had to set up barriers to protect themselves from traffic.

The city is working to convince people to live in these concentration camps, claiming they are in the best interests of poor people on the street. In truth, these hastily created camps are only there so that the city can appease real estate development. These facilities serve as places to warehouse poor people, so that the city can allow certain sites to be built upon. Once a camp is cleared, a barricade is put in place and officers are assigned to watch the site to ensure that no one returns to the site after their stay in the tuff sheds is over.

RUF is working closely with three encampments; one group pushed behind a public park, and two encampments sitting on privately owned vacant lots. Our conclusion is that the City hopes that by relocating the encampments closer to community members, they plan to use resident and neighborhood complaints about the encampments as an excuse to displace people. The city has also issued several false eviction dates in the hopes of scaring people off. While these false alarms are very stressful for residents, they have no where else to go.

Due to RUF’s previous work to expose the activities of the city of Oakland, the city knows it has to be careful to avoid further embarrassment. Officials have come to try and hold meetings, claiming they are honestly looking for residents feedback about how to proceed but the only thing they offer is a temporary bed and no guarantee of permanent housing. Recently, residents of the encampment called out officials at these meetings, refused to enter the cities concentration camps, and demanding real assistance.

After these incidents the city has not held further meetings, after claiming they would be a regular occurrence and have since taken to trying to form relationships with individual residents, to convince them to move. RUF has been clear with residents what these sheds represent and the city is already behind its goals for moving people out of the area.

However, there is too much profit to be made for them to simply give up. The City of Oakland will come to try to clear people out again and residents have to be ready. We do not know where they will strike first but regardless, residents from surrounding camps and outside activists must come together and defend the people.