Kashmir has long suffered under foreign occupation. Recently, there has been a massive crackdown on Kashmiris by India’s fascist government. This has sparked huge demonstrations in support of Kashmiri independence not just in Kashmir itself but also abroad, including the U.S. RUF sees this as a key front in building international solidarity with people’s struggles around the world, and is working hard to create deep links with this movement. 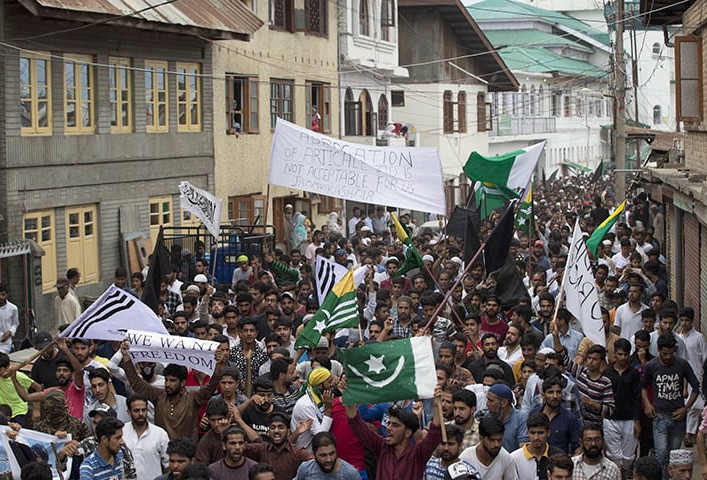 Large-scale protests have broken out in Kashmir despite the lockdown by the Indian Army.

Since August 5th, 2019 the people of Indian-occupied Kashmir have been living under a virtual siege. The Indian government imposed a communications blackout, cutting off phone, internet, and television access. The government also stepped up military patrols and put restrictions on travel. Kashmiris living outside of the valley have been unable to contact their relatives, and the few reports which have made their way out speak of medicine shortages, brutal repression of protests, and a total disruption of everyday life.

These measures were put in place by the Indian government just before they announced drastic changes to the legal status of Indian-occupied Kashmir. These changes destroy a few token measures of autonomy that Kashmir had in India, and are part of a very long history of brutal attacks on the Kashmiri people by the Indian government. These latest changes to Kashmir’s status within India threaten to lead to large scale ethnic cleansing and genocide. Because of this, the situation demands that people around the world raise their voices in opposition to the actions of the fascist Indian government.

Kashmir is a linguistically, geographically, and culturally distinct region located in the Himalayas which is currently divided between Pakistan, Indian, and China. It is rich in mineral resources, and possesses incredible natural beauty. This makes the control of Kashmir a priority for the Indian ruling class, who want to set up mining operations and build hotels and ski resorts to turn Kashmir into a tourist site. But the Kashmiri people have long been oppressed by the Indian state, and also have a long history of resistance. The brutal attacks they’ve suffered, the military occupation they have lived under, and the economic deprivation they’ve endured have created a strong movement in Kashmir in favor of independence. In order to loot the resources of Kashmir the Indian ruling class will have to destroy or defeat the Kashmiri people.

Kashmir has a long history of oppressive rulers. At the time of Partition, when British India was divided into separate, formally independent countries, Kashmir was a separate country ruled by a Maharaja. Before Partition there were several similar countries in South Asia that were called princely states, which were ruled by a British-backed puppet rulers.

The Maharajas in these countries were appointed by the British and ruled in the British interest, brutally taxing the people and helping to maintain British colonial rule. At the time of Partition, in 1947, the princely states were offered the choice of joining Pakistan, joining India, or becoming independent countries. The Maharaja of Kashmir, Hari Singh, initially elected to remain independent. He was the Hindu ruler of an overwhelmingly Muslim country, and his harsh taxation and repression policies were widely despised by the Kashmiri people. 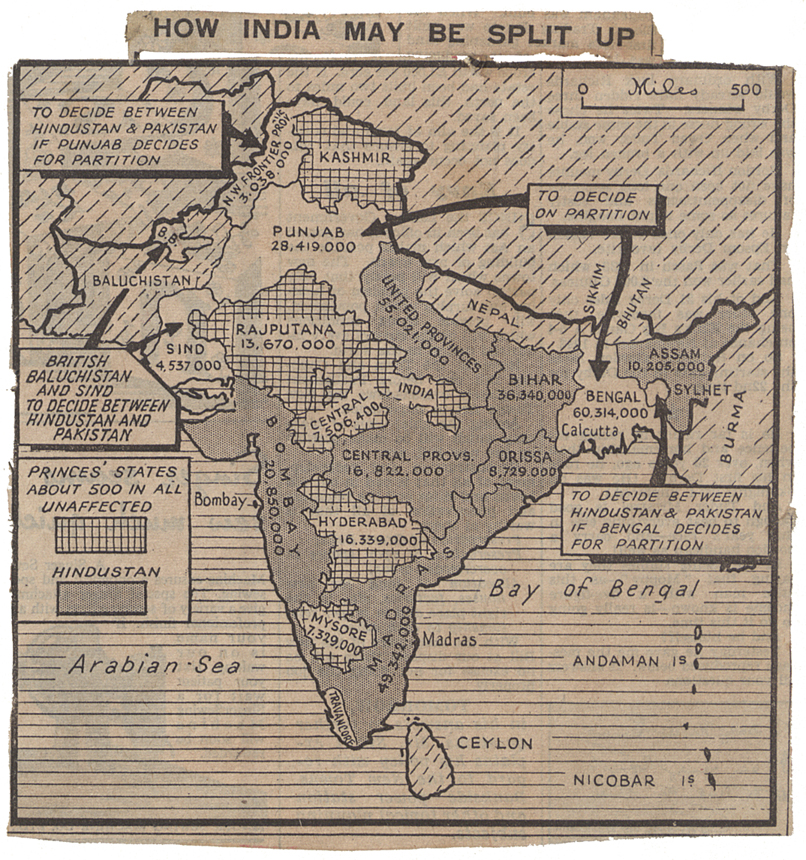 A map of British plans to partition the subcontinent. The colonial overlords devised various schemes to divide-and-rule the region even after transferring power to local elites.

In 1947 a protest movement developed against his rule, opposing his onerous taxation and oppression of the people. Pakistan, which had just been formed, seized on this opportunity to try to gain control of Kashmir. This sent the Maharaja into a panic, and he appealed to India for assistance. There was a relatively brief military confrontation between India and Pakistan, and in 1948 a ceasefire was declared in Kashmir. This is when the current ceasefire line, which divides the Pakistan-occupied and Indian-occuiped sections of Kashmir, was set.

Since 1948 a portion of Kashmir has been ruled by India and another portion by Pakistan. In both portions there have been independence movements in favor of a unified Kashmir, and in both portions the people’s will has never been respected. After the 1948 cease-fire, which was managed by the U.N., a U.N. resolution said that a vote should be held in Kashmir to see what the people of Kashmir want for their future. They were supposed to have two options: join with Pakistan, or two join with India. Both India and Pakistan have refused to carry out this vote. For them it is not important what the Kashmiri people want or what they think.

This latest attack on the people of Kashmir by the government of India is simply the latest in a long history of brutal oppression. The Indian army has stationed around 1,000,000 troops in Kashmir, about one soldier for every 7 Kashmiris, making it the most militarized place in the world. These troops have maintained control of Kashmir through a brutal reign of terror. They maintain secret torture centers, and Kashmiris endure arbitrary killings, random lockdowns, curfews, rapes, and more. The Indian soldiers have killed tens of thousands of Kashmiris, whose bodies are deposited in unmarked graves throughout the valley. They routinely open fire on protests with pellet guns, which have blinded thousands of Kashmiri youth. Despite all of this brutal oppression, the Kashmiri people continue to resist, and they continue to organize and fight for freedom.

Here in the U.S. the attacks on Kashmir have launched a series of protests and demonstrations in solidarity with the people of Kashmir. It’s important that we show solidarity with people’s struggles around the world, but our role in the U.S. is also more specific than that. This is because the U.S. government supports the siege on Kashmir, so our role is both to support the people of Kashmir and to oppose U.S. support for the fascist Indian government.

A protest in Boston against the ongoing Indian occupation of Kashmir. Prostesters wore red in solidarity with Kashmir. This was one of a series of coordinated protests across the world.

U.S. support for India’s actions in Kashmir is both direct and indirect. After a meeting with Pakistani Prime Minster Imran Khan, Trump said publicly that he would be happy to “mediate” between India and Pakistan about Kashmir. This statement, which was made before the announcement of the siege, caused a minor diplomatic panic in India. It also revealed that India consulted with the U.S. and Pakistan before launching the siege of Kashmir. The U.S. also sells arms to the Indian army, and last year the two countries signed an agreement called COMCASA allowing for closer military and intelligence cooperation. This support really does make it easier for the Indian state to do what it’s doing in Kashmir, so people here in the U.S. have a real duty to oppose it.

The U.S. based movement in solidarity with the people of Kashmir is still fairly new, but already there have been several large protests in cities around the country, including New York, Boston, Washington, and Seattle. Members of RUF have been actively supporting these protests. It’s important that people stand up to oppose the growing tide of fascism in India, and expressing solidarity with the people of Kashmir is a very important part of that. The situation in Kashmir can also expose to a wider audience what Narendra Modi and the BJP government in India represent, and help to build up a movement against fascism in India. The attack on Kashmiris is a particularly brutal assault, but it is also just one part of the BJP’s overall fascist policies and attacks on the people of India.

Freedom and self-determination for Kashmir!

Down with Hindu fascism! 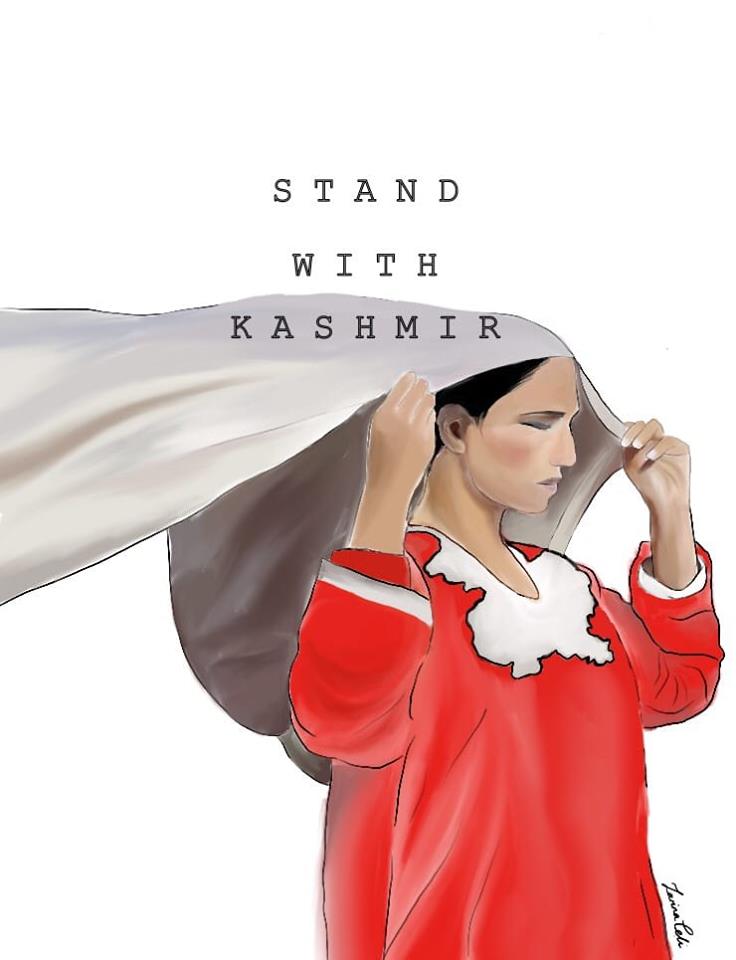