As Virus Spreads, Colleges Punt Students and Keep Their Cash

Due to the Coronavirus pandemic, universities all across the country have closed down, leading to the eviction of students from on-campus housing and a transition from face-to-face courses to an online format. Across the country at universities like Columbia University, University of Arizona, University of California Irvine, Lehigh University, Yale and others, students have been demanding refunds for tuition, housing, and unused meal plans and have cast doubts about the effectiveness of online courses. Overall, students claim they are not getting the education they paid for. Furthermore, students living on campus have been forced to leave despite the fact that many do not have a place to go. Many have been forced to travel long distances during a time of sweeping travel restrictions, a time in which 93% of the world’s population lives in countries where travel is restricted. There is a need for people to practice social distancing and avoid crowded spaces such as college campuses during the Coronavirus pandemic. However, students shouldn’t be left in a position where they are in debt, paying for services they are not using, or presented with a sub-par education. At the moment, many are essentially left to fend for themselves.

As unfortunate as these circumstances are, it is neither unsurprising that universities have put students in such a precarious position nor that they are unprepared to respond to the crisis. Historically, the university is an institution that dominantly serves the interests of the state and the wealthy. This is shown by the long tradition of weapons technology development for the United States military at universities. In addition, defense contractors like Raytheon are invited onto campuses by universities like Boston University so they can recruit university students to work for them after graduation. These corporations make their fortunes by designing weapons that kill innocent people all over the world as part of the U.S. imperialist war machine.

Furthermore, there is extreme inequality in academia and education. For example, one study found that there are more American students from the top 1% enrolled in universities than the bottom 60%. Some of the more elite private schools use “legacy” in their admission process, meaning that if a student had parents or grandparents that attended the university then their chances of getting in are higher. A recent scandal known as “Operation Varsity Blues” exposed how dozens of wealthy parents, test administrators, and college coaches rigged the college admission process for students whose parents were willing and able to pay bribes and engage in standardized test cheating. These are just a few examples that show how the university is designed to serve the interests of the state and the ruling class.

This has been made more evident as universities have transitioned to a model based more on ruthless corporate-type profit models. In the last ten years the average cost of tuition has increased 25%, student loan debt has risen to a total of $1.64 trillion1, and university presidents are in some cases earning over $1 million a year salaries. Universities now more clearly appear as profit seeking institutions for the rich rather than institutions that provide opportunities to working class people. With this in mind, it isn’t hard to understand why the university has done such a poor job protecting the interests of its students, particularly low-income students, who have a harder time responding to the crisis. The university may claim that telling students to leave campus is all about controlling the spread of Coronavirus. But, at the end of the day, the university is like any other business and is primarily concerned about revenue.

Having students stay on campus during the crisis would be a major liability concern and would put the university at risk of having to spend millions to provide emergency food, housing, and other services to students. It would require universities to actually think creatively about fulfilling these needs, but these institutions would rather focus on their so-called bottom line. In response to being kicked off campuses and having classes moved to an online format, students have demanded refunds on tuition and other services they previously paid for.

In the wake of the outbreak, universities are balking at student demands for tuition refunds. For example, Kutztown University in Pennsylvania has stated that it will not even provide partial refunds for tuition, but will offer refunds for 50% of fees for dining, housing, and other auxiliary services for the spring semester. In Wisconsin a similar strategy is being used by the University of Wisconsin System where the state’s 13 universities will refund just under $80 million for unused housing and dining services, but nothing for tuition costs. In California, the nine-campus UC system stated they will continue to charge the same amount of tuition and campus-based fees with no discounts, regardless of if a student is paying out-of-state tuition. One egregious example of university contempt for students' plight is from New York University. In response to students' demands for refunds on tuition payments, Allyson Green, Dean of NYU’s Tisch School of the Arts, recorded a video clearly stating the university would not provide refunds. As a conciliatory gesture however, she thought it wise to record a bizarre video of herself dancing in her apartment. Rather than lighten tensions, NYU students saw this as a slap in the face to their legitimate demands. The video also revealed the gap in wealth and circumstances between themselves and the university administration. 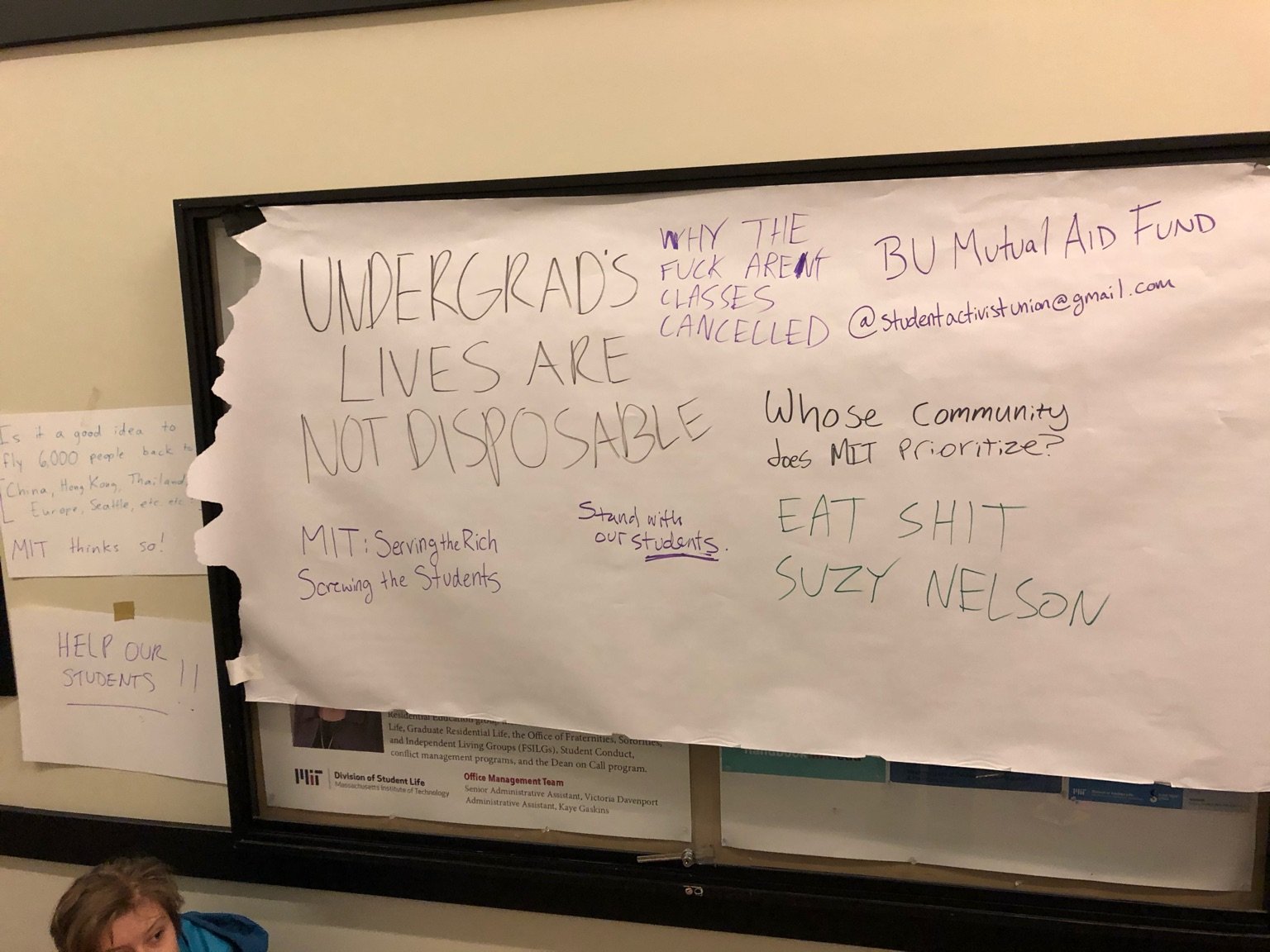 Students at MIT protested against the university’s decision to evict them from the campus and highlighted how MIT serves the rich and powerful.

These are just a few examples of universities that have switched to an online model, but that nonetheless decided not to refund or lower tuition costs. Most universities are claiming that providing tuition refunds would be a step too far and would drain their cash reserves. Therefore, they claim partial refunds on housing, unused meal plans, and service fees are the best they can do. This is ridiculous considering the vast amounts of cash reserves that many universities enjoy. Many universities have large endowments, donated money which they invest for profit in much the same way as a hedge fund.

At universities in the University of California system for example, the various endowments total about $16 billion, roughly $67,000 per student. At more elite institutions like Princeton, the endowment total per student is about $2.8 million. While the spending of endowment money is often restricted to specific projects, in times of crisis this money should be utilized to serve the interests of students. Despite universities' claims that they are doing all they can for students, it is clear that in times of crisis universities are unwilling to use cash reserves to protect their students.

Students have protested the way that universities have handled the housing situation in the wake of the virus outbreak. For example, at Boston University students were forced to vacate on-campus residence halls after the university had earlier informed students that vacating dorms was suggested but optional. Many students now forced to leave do not have a place to go and have had to find a place to live at the last minute. Some international students are unable to go back home due to travel restrictions. Others simply cannot afford the cost of moving and paying for a new place to live. In addition, sending people home has probably contributed to the further spread of the virus. The confusion and anger caused by the university’s unclear response to the situation prompted students to protest. As part of their demands, they called on the university to use money from BU’s $2 billion endowment to aid them. If the university insists on forcing students to leave, this money could be used to provide food, secure housing, or pay moving costs for students in this time of crisis. But given the prioritization of other interests over the safety and security of students, it is highly unlikely students there or elsewhere will receive such aid.

The BU student protest against the sudden forced eviction is just one of several related examples of student activism in recent weeks. Students are increasingly aware they are being ripped off by the university system, and they are growing tired of it. The increasing cost of college leaves many students in intense debt or simply unable to attend. On average, college students are paying $48,510 for private universities and $21,370 for public universities per year. Four years of such costs is a tremendous burden for working and middle-class families. In order to pay these high costs, students and their families have to take out loans.

Among the class of 2019, 69% of college students took out student loans and graduated with an average debt of $29,900. Taking out these loans forces students to borrow money from their future. It will take years at best for most to get out of such debt. This is an extremely unstable situation that puts students and their families in a dangerous position where debt payments will follow them for decades. Despite having a college degree, students in debt are 36% less likely to buy a house, less likely to take out car loans, and more likely to have poor credit scores. More college students are thinking twice about even attending college at all as a result. This puts people in a bind given that even low paying jobs often require a college diploma. The fact that some students would rather not go to college at all than spend tens of thousands of dollars on tuition or take out tens of thousands of dollars in loans is a strong indication that the university is not designed to serve the interests of working-class people.

The Coronavirus pandemic has further exposed the university for what it is, an institution that serves the interests of the state and the ruling class. Poor working-class people are unable to afford the exorbitant cost of tuition and risk going into intense debt as a result of attending university. Low-income students who have managed to attend college are in a much more precarious position than wealthy students as they respond to the outbreak. The present treatment by university administrations has pushed many students to the brink of homelessness and hunger. In protests, students have been struggling to demand that universities respect their needs in a time of crisis, but most institutions have only budged a bit, in general offering at most partial refunds for housing and other services. This is unacceptable as 8 out of 10 students work while in college to help pay their massive tuition, housing, food, and other school material costs. And now most of these students are out of a job, putting them in an even more financially dangerous position. Students should not be in this position. As the Coronavirus crisis continues to worsen, universities need to be forced not to simply abandon students.