In an article on the detention of Chinese dissident real estate mogul Ren Zhiqiang, the Times wrote that President Xi Jinping “declared that all Chinese news media had to serve the party. No Chinese leader since Mao Zedong had made that obligation so explicit.” Ren Zhiqiang, a Beijing based party official and billionaire, recently criticized China’s clampdown on media freedom as well as its missteps during its early response to the Coronavirus.

Xi’s demands on Chinese media incurred the ire of Ren Zhiqiang in 2016, when he wrote a polemic against the move, forewarning that if media served the party, it could not serve the interests of the people. On the anniversary of that polemic, this year, he wrote a new piece, criticizing the efforts of government authorities to cover up early information about COVID-19 that could have been vital to halting its spread. Following its publication, he was seized by authorities on March 12, and has been held since for “serious violations of law and discipline.” The detention of Ren for his declaration of such as reasonable point seems to be newsworthy itself. So why is the NY Times dragging Mao into the conversation?

While the Times calls Xi’s clampdown on the press a page out of Mao’s book, history tells a different story. In the late 1950s, on Mao’s recommendation, circulation of “Reference News,” (Cankao Xiaoxi) a collection of translations from newspapers abroad, were made available to hundreds of thousands of readers. This stands in sharp contrast to the trend in China in recent years which is to ban foreign news websites altogether. Mao also helped launch the Cultural Revolution, which encouraged the masses of people to criticize and struggle against leading officials in the government and the party.

In August, 1966, Mao issued a proclamation called “Bombard the Headquarters,"1 which supported mass efforts to criticize party members and leading officials. In it, Mao encouraged activists not to confine critiques to local officials, but to take the struggle to the center of political power. As professor Mobo Gao remarks in his article “Debating the Cultural Revolution”2 the popular movement flourished as a result. He documents that there were 542 official magazines and journals and 182 newspapers in circulation throughout China during the 60s-70s, as well as more than 10,000 unofficial newspapers and pamphlets published by common people, with 900 publications in Beijing alone. Such a breadth of media is a far cry from the present day U.S., where the number of independent newspapers and journalists has plummeted in recent decades.

Renowned African-American leader W.E.B. Dubois contrasted the ubiquitous repression in the United States in 1960 to the emancipation and freedom that he experienced in his travels abroad, particularly in China. He stated:

“Democracy has so disappeared in the United States that there are some subjects that cannot even be discussed. The essence of democratic process is free discussion. There was a time when men were not allowed to talk about universal suffrage of the education of women, or freedom for Negro slaves. Today Communism is the dirty word and Socialism is suspect … In the Soviet Union, and East Germany I saw a change of attitude toward the masses of people. Not as the wards and beneficiaries of the rulers of the nation but as the main body which itself owned the nation and for which the nation existed and as the reservoir out of which were being recruited those people who were making civilization. In China it seemed to me that the process was going even further. And that human-nature was being so changed that, instead of self seeking and class hatred which so characterized the west, that there was coming a sense of partnership in a vast and growing nation of willing cooperation and of a wide spread content and happiness which I had not seen elsewhere in the world. All this was my deep and firm impression."

In 1975, China adopted a constitution which, in its 13th article, enshrined the so-called “four Big Rights”: The right to speak out freely, air views fully, hold great debates, and write big-character posters. Complementing the deluge of unofficial newspapers were these big character posters—a method of debating ways to advance protests and to advance the democratic character of the movement by pasting large sheets of paper with essays on walls throughout cities and villages. During this time, many city streets were blanketed with these elaborate debates by young and old alike. The posters allowed millions to debate and express themselves on an unprecedented scale, the anti-thesis of a “state-controlled media.” 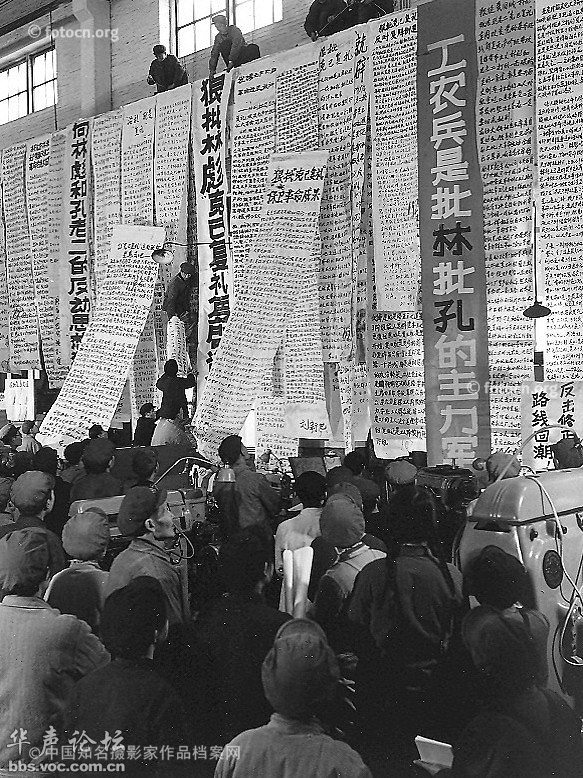 Dozens of big character posters up at a factory in Shenyang in 1972.

However, these rights were removed by an act of China’s National People’s Congress in 1980, and then jettisoned from the constitution, along with the right to strike, in 1982. These changes took place alongside the rise of the capitalist Deng Xiaoping, who imprisoned many of the leaders of the left, including Mao’s wife, Jiang Qing, following Mao’s death in 1976.

Deng Xiaoping wears a cowboy hat during a visit to the U.S. in 1979.

In the decades since 1976 further restrictions on mass freedoms have been rolled out, with current President Xi Jinping demanding in 2016 that the media “bear the party as its surname” i.e. that it serve the interest of the party in all that it does. Signs have proliferated throughout the country on government institutions, instructing people to “listen up to the party.” Since 2012, the websites of the New York Times and many other leading foreign newspapers have been blocked in China. And last month, Xi Jinping banned journalists from top U.S. newspapers from reporting in China altogether.

Part of the reason for the Times' historical-error is the rabid-anti-Maoism of officials such as Ren. Ren, like many in his class, became wealthy following the overthrow of Mao’s allies in the 1970s. This group links their success to the defeat of Mao and the mass movement that Mao had sparked. In Ren’s essays, he sings praise after praise to Deng Xiaoping. In recent years, a sizable group of wealthy people in China have grown resentful of the power exerted by President Xi Jinping over the government and economy. In some ways, Xi resembles the strongmen that have ambled onto the world stage in recent years, such as Trump, Modi, and Bolsonaro. The actions of these leaders often irk even the super-rich.

In a recent interview, economist Richard Wolff remarked on the sad state of affairs in the United States where Bill Gates and other billionaries are looked to as experts on epidemics and other crises, simply because of their wealth and purchased influence.

Unfortunately, in China, too, the critics of the regime who are promoted internationally tend to be the rich and powerful, such as Ren Zhiqiang.

Ren Zhiqiang ardently promotes free markets as the solution to society’s woes. Ren made headlines in 2010, when, with Elon Musk-like bombast, he proclaimed that youth who cannot afford to buy a house should retreat to the countryside. In turn, a shoe was thrown at him in protest.

His criticism of the Chinese government’s errors non-withstanding, one may wonder what Ren has to say about the chaotic response to COVID-19 in western countries which he promotes for being more oriented to the “free-market” than present-day Beijing. However, the very idea that the West is more free market than China should be viewed with some skepticism. For example, there are more ultra-wealthy individuals in China than the U.S. at present, and China has promoted aggressive free market “reforms and opening up” for over 40 years now. So it is not clear what the distinction between free-market America versus hyper-capitalist China entails for Ren.

There are also many people in China who are very critical of the present regime, and do not share the idea that free markets are the solution to present problems. Many of them see the people’s struggle in the time of Mao, and future struggles to re-establish a revolutionary society as a way forward for the people of China. While Mao’s image remains on China’s currency, it is an open secret that the current party in China disdains Mao’s legacy, and sees it as an obstacle to their current efforts to gain market share for Chinese capitalists in China and around the world. However, rather than reporting about the struggles of working Chinese people past and present, the Times and other such publications prefer to package the views of billionaire party members such as Ren Zhiqiang as voices of the people. Hackneyed comparisons of China today with the days of Mao often accompany these pieces of journalism. With such toadying to elites such as Ren and Gates on display in U.S. journalism, a bit of a Cultural Revolution in U.S. media seems called for.