The Disproportionate Impact of Covid 19 on Black Communities

The COVID-19 virus has continued to spread globally as the United States claims the highest amount of confirmed cases. With 2.5 million+ confirmed cases and over 170,000 deaths worldwide, and 800,000+ confirmed cases and almost 45,000 deaths in the U.S. alone, it does not look like the pandemic is ending anytime soon. But as the pandemic worsens it is becoming clear that certain communities in the U.S. are being hit harder than others. City, state, and federal governments have failed to release demographic data on COVID-19 infections in a timely manner even though the information is necessary to more effectively inform a public health response in Black communities. Amidst pressure from civil rights groups and minority communities, data is finally coming out which indicates Black Americans are disproportionately infected by the virus. In major cities across the U.S. Blacks account for a disproportionately high percentage of COVID-19 cases.

In St. Louis, Missouri Black people make up half of the total population but of the 19 deaths caused by COVID-19, 16 were black while 1 was white. In New York City, New York the death rate from COVID-19 for Black people is 20 per 100,000 while for whites it is 10 per 100,000. In Boston, Massachusetts, more than 40% of the people killed by COVID-19 have been Black, while Boston is just 25% Black. In Albany, Georgia, the Georgian city with the highest amount of deaths from COVID-19, more than 90% of the fatalities from the virus are Black. Recent national statistics have indicated that in the U.S., Black people make up 30% of COVID-19 cases despite being only 13% of the total population. The impact the virus has had on Black communities reflects the racist nature of the U.S. where in general Black people have less access to health care; higher rates of harmful health conditions like diabetes, obesity, and asthma; and a lower life expectancy than whites by approximately 10 to 12 years. It is important to understand the systemic nature to these problems in order to grasp the full scope of the impacts of systemic racism.

In total, over 40 million Americans live in poverty, 20.8% of whom are Black. Poverty increases the risk of infection by COVID-19 for a multitude of reasons. For example, access to health care is expensive. The national average monthly cost of health care coverage is currently at $511 and 28 million Americans do not have health insurance, 8 out of ten of those without health insurance are workers or their dependents. Paying medical bills out of pocket is financially devastating for working class people and doing so can force individuals and families into crippling debt. In many cases, people without health insurance will choose not to seek medical care which can exacerbate health problems. Since Black people people are more likely to be uninsured* than their white counterparts and because Black families have only 10 cents for every dollar held by white families, the high costs of medical care disproportionately impact Black people. These facts also help to explain why Black people have higher rates of harmful health conditions which make them more prone to infection and death by the virus. For example, people living with compromised immune systems are at higher risk of infection by COVID-19. H.I.V./AIDS is an example of a disease that destroys the immune system, and in the U.S., there are over a million people living with H.I.V. and nearly half of those are Black. And as a result of poor access to health care, only 61% of Black Americans infected with H.I.V. received treatment for the virus in 2016.

Homelessness is another symptom of poverty that contributes to the disproportionate impact of the COVID-19 pandemic on Black Americans. While homelessness impacts people of all nationalities in the U.S., Black people are more likely to be homeless. In 2018, at least 552,830 people were typically experiencing homelessness on any given night. Of that number, Blacks made up 40%. This is particularly alarming in the face of the pandemic as homeless people are at much higher risk of infection due to unsanitary and highly social living conditions, a lack of access to running water, and the inability to effectively shelter-in-place and quarantine if infected by COVID-19.

Imprisoned populations are also at much higher risk for contracting COVID-19 than others. Prisons have been shown to be hot spots for the spread of COVID-19 and Black people make up a disproportionate amount of those incarcerated. Currently, there are 2.3 million people imprisoned in the U.S., about a third of whom are Black. Given the overcrowding endemic in prisons, prisoners are at high risk of contracting the virus. What’s more they are not likely to receive appropriate medical care or resources to properly protect them from infection. In the wake of a suspected COVID-19 infection, The Metropolitan Correctional Center in New York City failed to respond effectively and was unable or unwilling to test prisoners for the virus. There is a serious outbreak of COVID-19 at the Cook County Jail in Chicago, one of the largest in the nation, where 73% of the prisoners are Black. More than 300 inmates and more than 200 employees tested positive for the virus and 3 have died. Since officials at the jail are refusing to release more prisoners, the virus is likely to infect and kill many more people.

On top of being at greater risk to infection by COVID-19, Black people have also been the target of increased racial profiling when wearing masks. Due to a long history of white supremacist propaganda that frames Black men as criminals and violent threats to society, wearing a mask in public to protect from the virus brings other risks. In one case, two Black men wearing protective masks were followed and harassed by a police officer in a Walmart in Wood River, Illinois. Despite a state mandated requirement for people to wear masks, the police officer told the men they could not wear masks under the pretense that the two men were “acting suspiciously.” This was clearly an incident of racial profiling and demonstrates the racist nature of the police who have a long history of harassing, harming, and killing Black people.

All of these examples demonstrate how systemic racism is alive and well during this pandemic. It is important to note that it is not just living under poorer conditions that puts Blacks and other oppressed groups in danger right now. Historically, in times of crisis or national emergency, the existing inequalities and disparities in the white supremacist capitalist system are heightened. Poor and oppressed people are often the most vulnerable to natural or human caused disasters and mandated emergency responses tend to be the most inadequate at helping these communities. 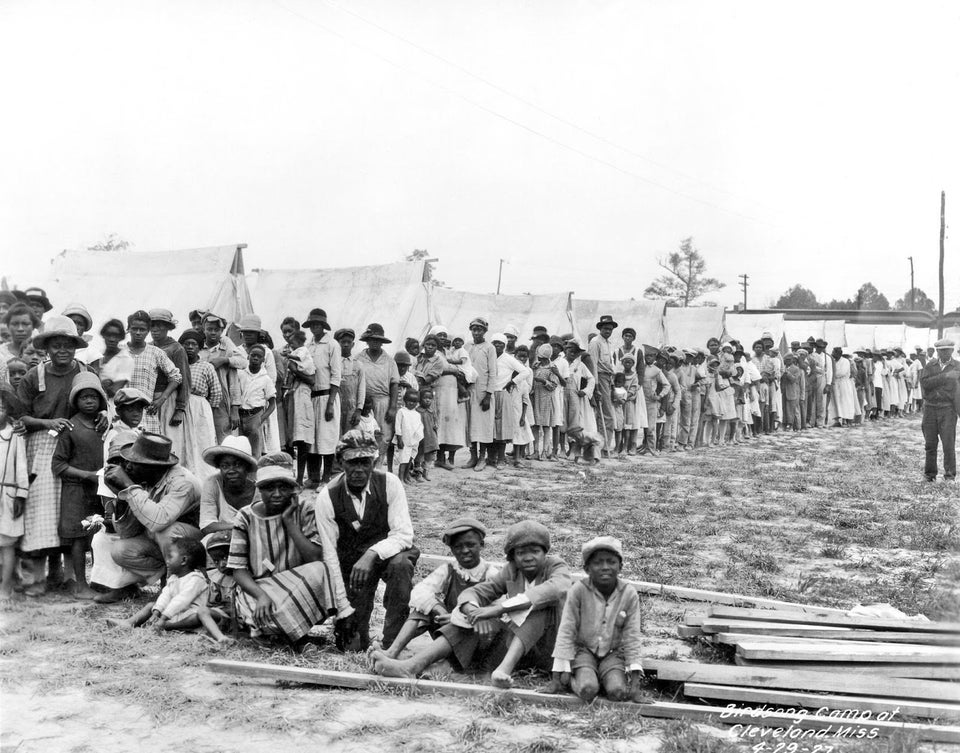 Images of refugee camps set up after the Great Mississippi Flood. These camps were essentially concentration camps, where Black refugees of the flood were forced to work and not allowed to leave.

For example, the Great Mississippi Flood of 1927 is considered to possibly be the worst natural disaster in American history. It displaced upwards of 1 million people and killed over of 1,000, 90% of whom were Black. Throughout this crisis government officials downplayed the fact that this disaster disproportionately devastated Black people. Many of those affected by the flood had to go to state-sponsored relief camps occupied by armed guards who abused them and conscripted them to work in the clean-up efforts. President Coolidge chose the future president Herbert Hoover to oversee the federal relief response. Hoover ended up suppressing reports of racist violence and exploitation in the relief camps. 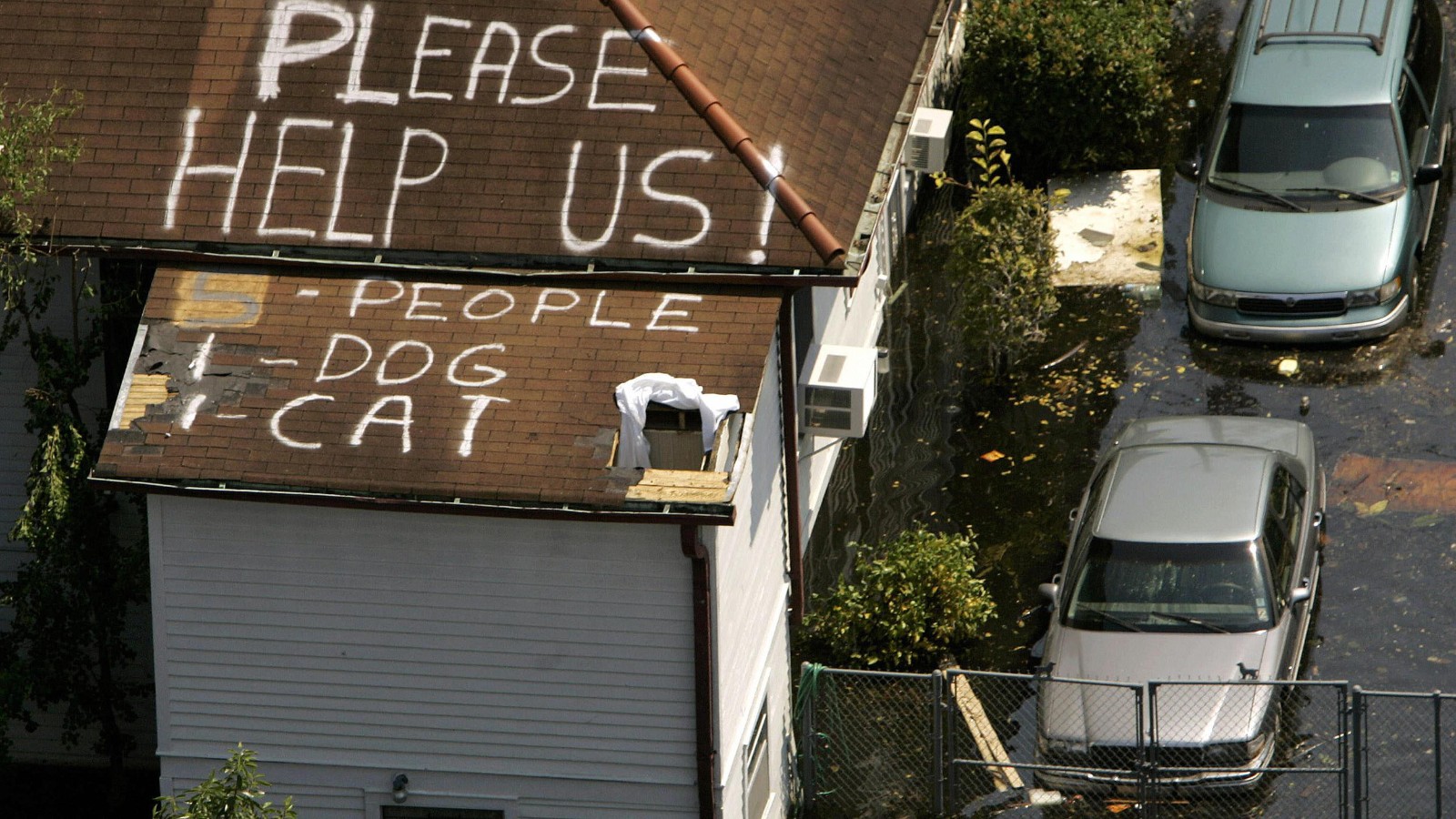 Residents in New Orleans beg for help after Katrina.

Hurricane Katrina is another example of how working-class Black people were left to die during a natural disaster and then screwed over again in the aftermath. In 2005, Hurricane Katrina hit southern states in the Gulf of Mexico and devastated the city of New Orleans, where 60.5% of the population at the time was Black. Along the banks of the Mississippi River stood a number of levees and dams to keep flood water from entering New Orleans. Behind these levees and dams resided mostly working-class Black communities who the state knew would be devastated if the preventative measures failed. In the wake of the hurricane, due to failed mechanisms in the levees, flood waters overtook the city which led to the death of 1,500 people and the displacement of tens of thousands. 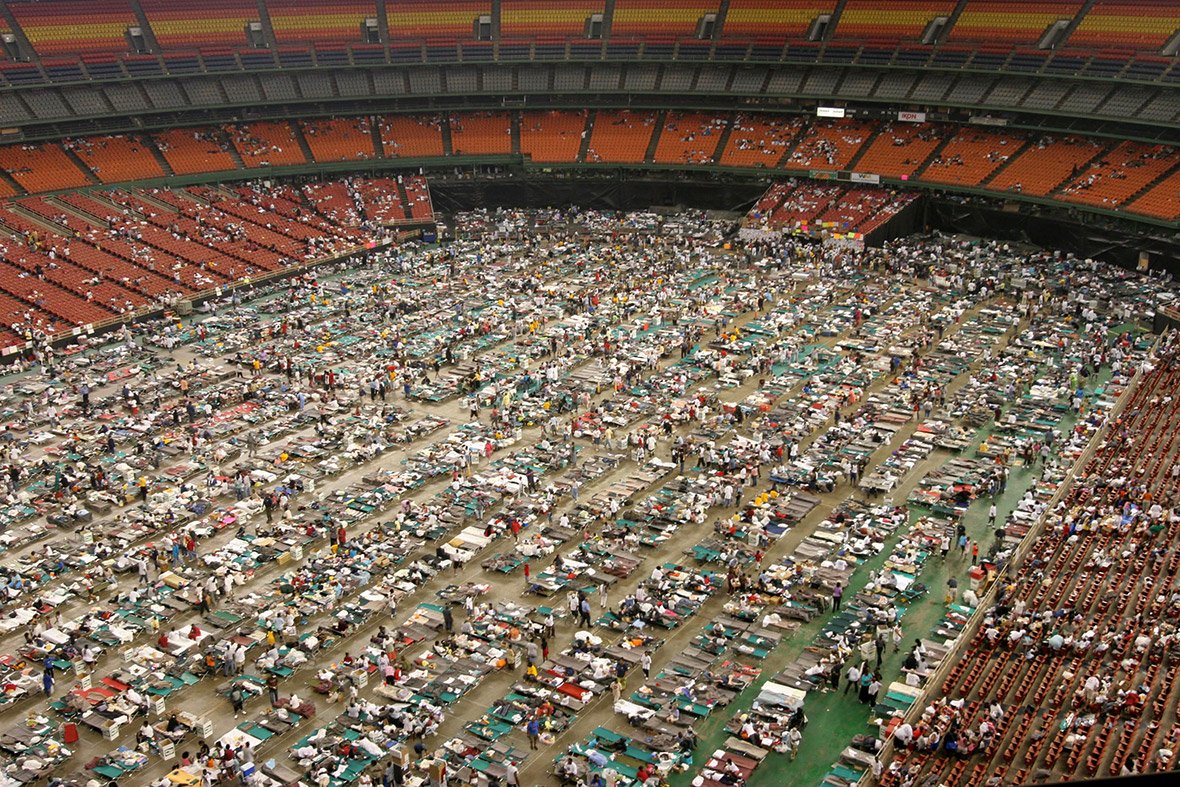 After Katrina hit many refugees were housed temporarily in the Astrodome stadium in Houston, with minimal support and supplies.

Refugees from Katrina wait to be evacuated outside the Superdome, New Orleans' football stadium, which was also used as an emergency shelter.

Relief efforts were dismal as many were left to fend for themselves in extremely dangerous conditions. Although the then-mayor of New Orleans, Ray Nagin, ordered a mandatory evacuation of the city, many were simply unable to evacuate. A study of New Orleans residents who were “rescued” and evacuated to Houston after the storm found that at the time of the Hurricane, 55% of people did not have a car or a way to evacuate and 68% didn’t have money in the bank to cover emergency expenses or a usable credit card. Emergency evacuation protocols were designed under the assumption that people had access to a vehicle or money to afford completely uprooting their lives, which for many was not the case. This negligence demonstrates the state’s incompetence and willingness to abandon Black people, allow their homes and livelihoods to be destroyed, and let them die in times of crisis.

The devastation of the Great Mississippi Flood and Hurricane Katrina expose the structural racism of the U.S. Both the vulnerability of working-class Black people in the wake of the disasters and the failed response by the state have deep implications for the current COVID-19 pandemic. Poverty, lack of access to medical care, and racial profiling force Black communities into a precarious position where they are more vulnerable to infection and societal stigma. Furthermore, emergency response measures like social distancing are not feasible for many working-class Black people, who experience disproportionate rates of poverty, homelessness, incarceration, and are more likely to still be working during the pandemic. In fact, 37.7% of workers in essential service industries are Black as compared to 26.9% white. Black workers are also more likely to work jobs with a higher likelihood of being infected and more likely to have jobs that require close proximity to others. This further proves that working-class Blacks are at greater risk to infection and less able to follow the guidelines to prevent spreading the virus.

Examining the position that Black communities occupy in the U.S. reveals systemic racism in almost every facet of life. The U.S. is built upon the dehumanization, brutalization, and discrimination of Black people. This reality is only exacerbated in times of crisis. As Black people experience higher rates of poverty and related forms of oppression, there is also a need to critique the capitalist system as a whole, which was built and expanded through the exploitation of first African slave labor and later Black working-class labor. This history is with us today, as is evident in the COVID-19 pandemic where the Black community in the U.S. has been subjected to a disproportionate number of infections and deaths as well as increased racism and discrimination.