Why We Are Covering the Coronavirus

We have decided to start providing up-to-date coverage of key developments with the Coronavirus outbreak here in the U.S. and around the world.

We believe this is crucial because by all indications the outbreak will be a huge disaster here in America. The preparations that the U.S. government is taking are totally inadequate, and the virus threatens to completely overwhelm the entire U.S. medical system, leaving millions of people suffering and dying.

Unlike some other places around the world, the U.S. government’s response to the virus has been both slow and incompetent, with problems and mismanagement cropping up at all levels. The government has not only experienced huge delays in producing and distributing test kits, but top officials have repeatedly lied about the extent of the problem. Vice President Mike Pence, who has been put in charge of the Coronavirus response, claimed on Wednesday March 4th that “roughly 1.5 million tests” were going to be available soon, but as of Friday March 6th only around 1,900 people had been tested.

This is despite the fact that the first Coronavirus infection was detected on December 1st, 2019, and that the World Health Organization (WHO) developed a test back in January. The U.S. CDC, Center for Disease Control, decided to develop its own test instead of using the WHO’s, but the initial version of the test produced by the CDC didn’t work. This meant that for weeks the U.S. was effectively unable to test anyone for the Coronavirus. Right now, in early March, the U.S. public health system is just beginning to get basic testing off the ground.

For comparison, consider South Korea, which is currently dealing with one of the worst outbreaks of Coronavirus outside of China. While as of Friday March 6th the U.S has so far tested around 1,900 people, South Korea has already tested more than 136,000 people. A recent paper showed that even with the massive and unprecedented quarantine that was put in place in Wuhan, China to slow the spread of the Coronavirus the number of cases still doubled every 7.4 days. Since the U.S. has done essentially nothing to stop the virus from spreading it is certainly spreading more quickly here. This means that the current number of confirmed cases here in the U.S., which stands at 566, is almost certainly a massive underestimate. 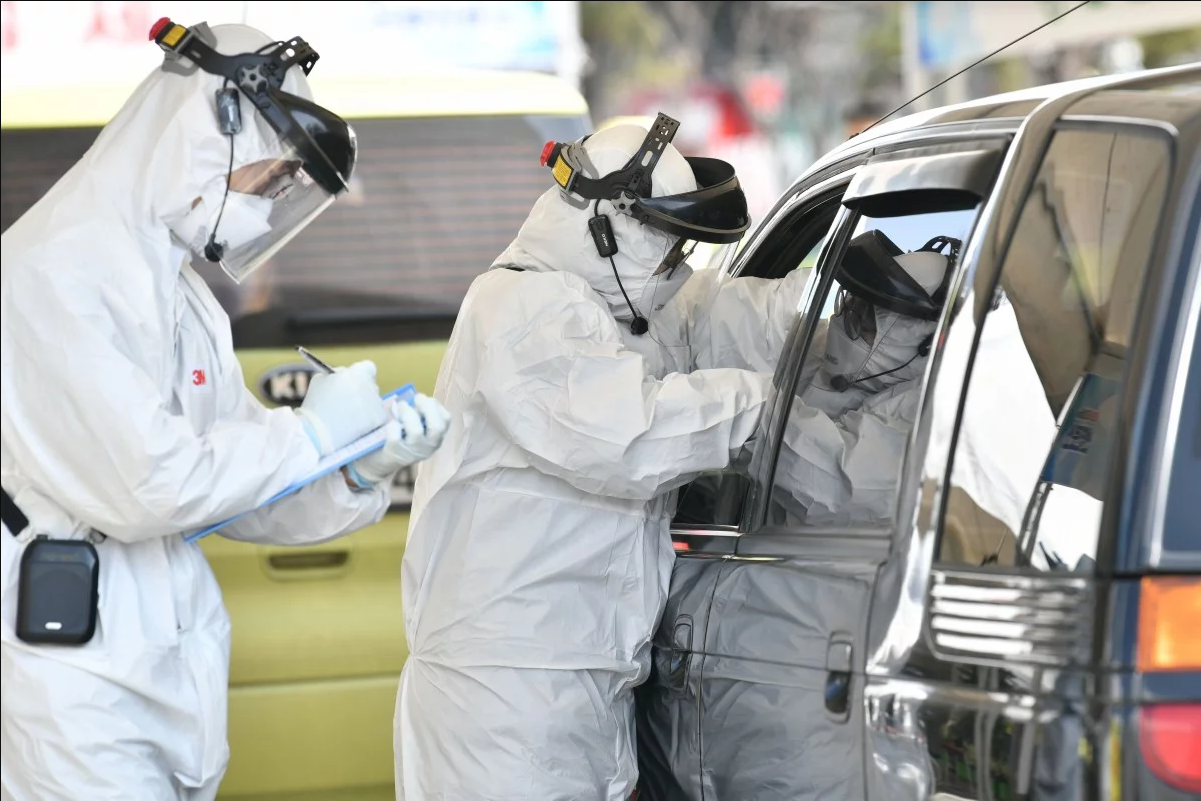 Meanwhile, President Trump is downplaying the problem and saying it is “just like a flu” while the CDC and other federal agencies are making mistake after mistake. The New York Times and Politico reported that Trump has become obsessed with keeping the official number of Coronavirus cases as low as possible. He is not trying to keep the problem from getting worse, but instead trying to protect his image by concealing the extent of the problem, and while Trump worries about how the numbers make him look the virus is spreading like wildfire.

In South Korea they have also started disinfecting city streets and all public areas, people are wearing masks in public, and the country has been mobilizing strongly for weeks to try to defeat the virus. Even with these strong efforts the number of people infected in the country has gone from around 500 to over 7,000 in the last two weeks. Through these efforts South Korea has slowed the growth of the virus significantly. The South Korean government is not a pro-people or revolutionary government, but the success that they have had in slowing the epidemic shows that even reactionary governments can do more or less effective jobs at fighting the disease. It also clarifies in comparison that the U.S. government is disastrously decadent and incompetent, even in comparison to other capitalist governments.

Here in the U.S. basic testing isn’t in place. The public health system here has been attacked by budget cuts and privatization, tens of millions of people do not have health insurance, and, to top it all off, the politicians and bureaucrats who are in charge are making mistake after mistake in managing the crisis. So the future of the Coronavirus in the U.S. is going to be much worse than it has been in South Korea.

But it is not going to be the case that everyone suffers equally in the crisis. The rich and powerful will be able to quarantine themselves in their homes, get high-quality medical care, and if it gets really bad they may even flee the country. But for millions of working people dealing with Coronavirus is going to be a huge disaster.

As one example, take quarantines. If someone is infected an effective way to stop the virus from spreading to other people is to quarantine that person in their home, so that they have as little contact with other people as possible. But in order to be effective the quarantine has to last until the person is no longer contagious.

This sounds fine in theory, but how are the 78% of Americans who live paycheck-to-paycheck supposed to quarantine themselves if they get sick? If you’re truly living paycheck to paycheck then missing even a single week of work is a disaster: it means unpaid bills, having to skimp on groceries, losing a car, losing your job, or even being evicted.

The virus also much more strongly affects people who are older and who have certain health conditions. Diabetes and heart disease are two major risk factors for Coronavirus. People who have them, and people who are older, are much more likely to develop a very bad case if they are infected, and are at a higher risk of dying from the infection. The U.S. has one of the the highest rates of diabetes of so-called “developed” countries and heart disease is the leading cause of death. This means that large sections of the population in the U.S. are especially vulnerable to the Coronavirus, especially when these medical conditions are combined with poor access to medical care, bad nutrition, and poverty.

There are also systemic risks too. Many commentators have pointed out that if Coronavirus spreads unchecked in the U.S. it will overwhelm the healthcare system, leading to a situation where key supplies run out and millions in need of care cannot get it.

The virus has also already caused a major economic downturn in China, and there will be a major downturn here too, which will become catastrophic if nothing is done to contain the epidemic. This will lead to mass layoffs and rising unemployment, many people losing their homes through foreclosures, shortages of basic goods, and inflation.

In this context, we have decided to start this special blog to try to inform people about what is going on. We plan to analyze new developments as they arise, to combat misinformation and conspiracy theories, and to analyze the virus outbreak from a political perspective by placing it in the context of current national and international political developments. We hope that this information can help the people of the US and the world in the struggle to come.

This coming crisis is undoubtedly going to be difficult. Many will get sick, and many people will die. We cannot pretend to hold the secret to avoiding the crisis, and we cannot provide a foolproof way for people to protect themselves. We believe that the coming months and perhaps years will be a very difficult time for people here in the U.S. and around the world.

But we also believe that the situation isn’t hopeless. There will be very big opportunities for the people to get organized and struggle to change the situation, from pushing hospitals to waive testing fees and other medical bills to organizing community support networks to get groceries and other essentials to people who are quarantined.

We can see clearly from the government’s response thus far that they are both incompetent and not interested in protecting people from the Coronavirus. This is the same oppressive government which keeps millions of people locked up in cages and in prisons. It wages imperialist wars of aggression and slaughter all around the world. Millions of people within its borders sleep on the streets, and millions more struggle on a knife’s-edge just to make it day-to-day.

The government of this country acts relentlessly to protect the interests of a few incredibly wealthy capitalists so they can continue oppressing and plundering people here in the U.S. and all around the world. It does not work to serve working people, but people like Jeff Bezos, Bill Gates, and Warren Buffett. This is why Wall Street reopened only two days after Hurricane Sandy hit New York, but residents in Manhattan housing projects were left without food and running water for over a week.

Of course a government like this is not taking the Coronavirus seriously. We cannot rely on the government to address this crisis and simply wait for things to blow over. We need to seize the time to build people’s power to fight back against government mismanagement and attacks on the people.

If we get organized, if we stick together, and if we confront this situation in an organized way, we can win big victories. These include fighting the pandemic and blocking attempts by the system to use the crisis to further divide working people against each other.

A key part of getting organized to oppose the Coronavirus is critically analyzing the situation so that we can cut through the lies and obfuscations of the government as well as of conspiracy theorists. It is in this spirit that we’re starting our coverage of the Coronavirus here.

Stay tuned for updates and analysis of key developments here in the U.S. and internationally!